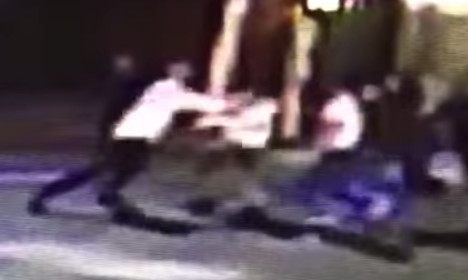 CCTV footage shows Stone fighting several men in Sacramento. Photo: YouTube/Screenshot
Airman Spencer Stone was stabbed in Sacramento after he got into a fight with a group of men as he was leaving a bar with friends, Ken Bernard, the city's deputy chief of police, told reporters.
He said police received a call at 12:46 am from a passerby who witnessed the incident.
Bernard said officers who arrived at the scene found Stone with multiple stab wounds to his upper torso.
He was rushed to a nearby hospital where he was listed in serious condition after undergoing two hours of surgery.
The CCTV video, below, shows Stone and several other men in a chaotic fight at a roadway intersection. After Stone is knocked down twice, the men all flee in different directions.
“He is currently being treated for what appears to be non-life threatening but very significant injuries,” Bernard said, adding that two male Asian suspects were being sought in connection with the attack.
A source close to the investigation told AFP that Stone was apparently trying to defend a woman being harassed by a group of men outside the bar when an argument escalated and he got stabbed.
It was unclear if the woman was with Stone. (US Secretary of Defense Ashton Carter presents the Airman's Medal to Spencer Stone. Photo: AFP)
“A woman was being harassed and he got involved,” said the source, who spoke on condition of anonymity.
The source said several of those in Stone's group — three women and another man — were drunk but it was unclear if Stone himself was inebriated.
Video footage of the incident caught by a nearby surveillance camera and released by US media shows Stone fighting off a group of men who scatter when what appears to be a police car arrives at the scene.
A red stain can be seen spreading on Stone's white shirt.
Another surveillance video released by police shows the two alleged suspects involved in the altercation running and getting into a car that quickly drives off.

Bernard said the assault was in no way related to a terrorist act or to the train attack that Stone and two of his friends helped foil while vacationing in France.
Just weeks ago, the town of Sacramento staged a “Heroes Parade” in honor of the trio.
Stone suffered deep slash wounds as he helped to overpower a heavily-armed gunman, 25-year-old Moroccan Ayoub El Khazzani, on August 21. (Spencer stone is second from the right. Photo: AFP)
Armed with a pistol, an assault rifle and 270 rounds of ammunition, Khazzani is accused of seeking to massacre passengers on the Amsterdam-Paris
train.
Stone was awarded the Legion of Honor, France's highest decoration, along with Army National Guard Specialist Alek Skarlatos and Anthony Sadler, a civilian.
The trio was also invited to the White House by President Barack Obama and Stone received a Purple Heart and an Airman's Medal from the Pentagon.
Stone had only just returned to work at Travis Air Force Base near Sacramento. (French President Francois Hollande meets with Spencer Stone. Photo: AFP)
Skarlatos also had a near miss last week.
The 22-year-old had been due to attend the college in Oregon where a gunman went on a rampage, killing nine people.
The only reason he was not at Umpqua Community College in Roseburg, he says, was the attention he has been getting since the train attack.
Instead, he was in Los Angeles rehearsing for this season's “Dancing With the Stars,” in which he has been invited to compete, when he heard of the shooting and rushed back to Roseburg where he is assigned to an infantry unit.
“If I didn't get called for 'Dancing' I would have been on campus,” Skarlatos said.
“I mean, it's just absolutely insane to be in a situation like this, especially in my town, Roseburg.”
Skarlatos issued a message of support on Thursday, tweeting: “Everybody send prayers out to the Stone family today.”