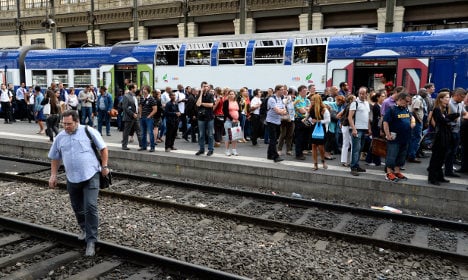 A file image of rail users stranded in Gare de Lyon in Paris. Photo: AFP
When it comes to a rail strike in France, you'd expect it to be the workers protesting – not the passengers.
But on Thursday, members of fifteen train user groups across France decided that it was high time to show rail operator SNCF they had run out of patience with its “pricey sub standard” service.
So on Thursday passengers protested in the classic Gallic way of going on a strike – and instead of showing a valid ticket to conductors – they gave them the counterfeit ticket below.

The ticket lists a series of problems that users have with the train networks, including that it's “too expensive for a non-service”, that trains are too often delayed, and that passengers are rarely notified of delays.
Protesters planned the day strategically, with SNCF workers also on strike on Thursday protesting working conditions and salaries.
The spokesperson for the passenger strikers told France Inter radio that with regional elections in three months and a presidential election in two years, there had never been a better time to act.
Jean-Claude Delarue, from rail user group SOS-Usagers, said his group supported the passenger strike, agreeing that France needed to address its failing rail system.
“France is one of the richest countries in the world, and Paris is one of the richest regions. Yet we still have third world problems when it comes to the train lines,” he told The Local.

(Commuters at St Lazare station during the RER strike)
“The railroad service, especially around Paris, is especially bad. Many commuters heading into Paris take earlier trains to make sure they get to work on time.”
He said railroads were also poor in the Provence-Alpes-Côte-d'Azur region of south eastern France, and around Lyon in Rhones Alpes.
“The government and SNCF have put rail maintenance on the back burner for the last 20 or 30 years, and now we're witnessing the dire consequences,” Delarue said.
Delarue, whose group will be running for regional elections in early December, said he thought the protests were a good way to put pressure on the government and SNCF.

(Photo: AFP)
“A strike is a part of a solution. This is a society where things can change with a shift in public opinion. A peaceful protest with no violence at all shows very clearly that people are having huge problems with an everyday issue.”
Earlier this year, a group of disgruntled rail passengers launched an unprecedented bid to sue Paris transport chiefs over their daily transport misery.
They claimed that 10-minute journeys into La Défense, one of the biggest financial districts in Europe, were taking up to 40 minutes on a daily basis.