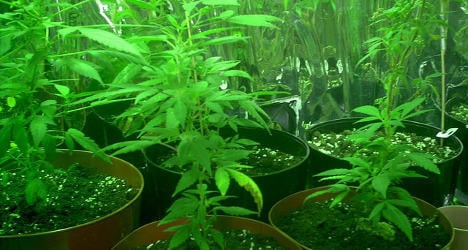 One of France's biggest drug dealers, who based his operations in the notorious Marseille housing estate of La Castellane, was sentenced to eight years in prison on Wednesday.

Nordine Achouri, 33, ran a cannabis-selling network based in Tower K of the development that brought in up to €80,000 ($90,000) a day, according to accounts seized by police.

The court in Marseille convicted Achouri along with 27 other members of the gang, who received sentences ranging from 12 months to six years in prison.

Thousands of buyers frequented Achouri's drug peddlers around the rough estate built in the 1950s to house Algerian immigrants in the southern French port.

Its maze of concrete has turned into a hive of prostitution, gun-running and drug trafficking, and is often labelled a no-go area for police.

A record 1.3 million euros in cash was seized by police when they raided Achouri's gang in June 2013.

“The court has not made an example of these people. These are typical punishments for drug trafficking at this level,” said Hakim Ikhlef, lawyer for Achouri's right-hand man, who received a six-year sentence. (La Castellane district of Marseille is notorious for drugs and gangs. Photo: AFP)

But one of Achouri's lawyers said he was “disappointed” with his client's convictions for purchasing, selling and transportation of drugs.

“I've never seen any proof,” said lawyer Philippe Vouland. “He never had product or money in his hands, and his name does not figure in the accounts.”

Achouri's lavish lifestyle — throwing huge sums around at casinos, tending to his horses and holidaying in Marbella — worked against him, since he had no official job.

He denied having any ties to drug trafficking, saying he made his money as a “business middleman”.

Achouri, who has been in custody since the 2013 raid, started to react loudly when the verdict was delivered, but was swiftly reprimanded by the judge.

“He meant that he found the judgement hard to understand,” said Vouland afterwards.

Many lower-level gang members, charged with storing the drugs, delivering them to dealers or providing other backroom services, are also facing prison terms.

Most have stuck to their rigid code of silence throughout the trial and investigation, with most evidence coming from anonymous sources and hours of wiretapped conversations.

La Castellane was back in the news in February, when policemen came under Kalashnikov fire on the same day as a visit by Prime Minister Manuel Valls.