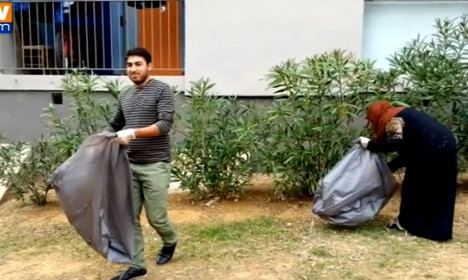 Syrian refugees clean up the streets of their neighbourhood in Beziers. Photo: screengrab BFM TV

It’s a war of words that has been taken to the streets, but not in the way you might expect.

On Sunday, around 15 Syrian refugees in the town of Beziers in southern France pulled on rubber gloves, reached for rubbish bags and began to clean up the La Devèze neighbourhood which has become their new home.

The aim was to make the area a healthier place for children, while ensuring people didn’t blame the refugees for the dirtiness of the area, Omar Khatiri of local association Cultures Solidaires told regional daily Midi Libre.

“It was already dirty when they (the refugees) arrived but we have the feeling it’s gotten worse and we don’t know why. They use the containers but the rubbish ends up in the parking lot again,” he added.

The clean-up went ahead despite objections from a neighbour who argued it wasn’t up to them to clean communal areas.

Several bags of rubbish were filled with dead rats among the refuse, Midi Libre reported.

But the mayor of Beziers Robert Ménard, who came into power with backing from France's right-wing National Front party, wasn’t impressed by the group’s efforts.

After Sunday’s clean-up efforts the mayor told L’Express newspaper the exercise was mere propaganda on the part of the refugees.

“They can clean all they want! That won’t make people forget they illegally occupied government housing blocks. They entered by smashing down the doors,” he said.

Ménard has become a household name in France since being elected in May last year, thanks to several inflammatory measures he has taken as well as number of media stunts.

In September, an angry Ménard sparked outrage after a video showed him visiting Syrian refugees in Beziers and telling them “you are not welcome in this town”. His attempt to expel the refugees from the housing block was only halted when he was reminded that evictions can only be ordered by a court.

But he has not backed down in his pursuit of local refugees.

In an open letter to the editors of Le Midi Libre posted on the town hall’s Facebook page, Ménard — a former journalist — went on to say it wasn’t the place of squatters “to complain” (about cleanliness), and queried whether journalists had done their research on who was behind the cleaning “promotion”.

But Khatiri of Cultures solidaires dismissed the mayor’s comments.

“These refugees are living in empty, unhealthy apartments. A month and a half ago they were sleeping on the street, and no one cared,” he told L’Express.

The spat over street cleaning came on the same day that Beziers Town Hall published a post on its Facebook page featuring a short video of a group of Syrian ‘squatters’ returning to an apartment block in the town.

“Illegal immigrants in La Devèze, they are still arriving. What is the state doing?” the post asked.

“The social housing occupied by these illegal immigrants was being renovated. Those renovations have now been interrupted. The companies can’t come here and work,” the author of the post continued.

“It should be noted that these immigrants arrived in a taxi!!

But one of the Syrian refugees in the video was quick to explain the situation to Le Midi Libre.

“I have been here for two months, I was coming back from Toulouse to look for my wife, my son and my parents. We arrived on Friday at around 6.30pm. The taxi was paid for by our insurance company because our car broke down,” said Fayad Hikmat.

France has declared it will accept 24,000 refugees over the coming two years, but they will only be relocated to those towns willing to open their doors.

On current form, Beziers is not likely to be terribly high up the wish list.