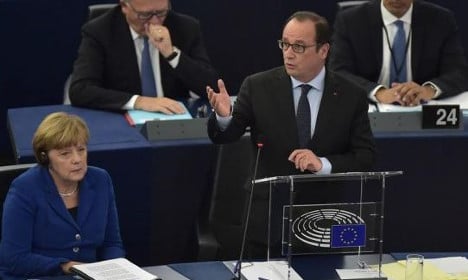 French President Francois Hollande on Wednesday warned of the “end of Europe” if EU member states fail to remain united to tackle the refugee, euro currency and other crises.

“We need not less Europe but more Europe. Europe must affirm itself otherwise we will see the end of Europe, our demise,” Hollande said in a landmark joint address to the European Parliament with German Chancellor Angela Merkel.

“I acknowledge that Europe was slow in understanding that tragedy in the Middle East or Africa could not but have consequences for Europe itself,” he said.

For her part Merkel said that the European Union's asylum rules were “obsolete” as they put the burden on EU states where migrants first arrive to process claims for refugee status.

“The Dublin process, in its current form, is obsolete,” Merkel said in a joint speech to the European Parliament with French President Francois Hollande, calling for a new procedure to spread out asylum seekers “fairly”.

On the subject of Syria Hollande said failure to act risks stoking a “total war” in the Middle East.

“What happens in Syria concerns Europe, what happens there will determine the balance of the whole region for a long time,” Hollande said.

“If we leave these religious clashes between Sunnis and Shiites, they will grow. Don't think we will be sheltered, this will be a total war.”

“This is a historic visit for historically difficult times. The EU is facing immense challenges and requires strong commitment by its leaders,” Schulz said in a statement announcing the visit.

“It is an important signal that such commitment will be made in front of Europe's democratically elected representatives,” added Schulz.

Merkel and Hollande, the leaders of the European Union's two biggest economies, have played a leading role in a series of challenges that have gripped the 28-nation bloc, ranging from the migrant crisis to the Greek debt saga and the conflict in Ukraine.