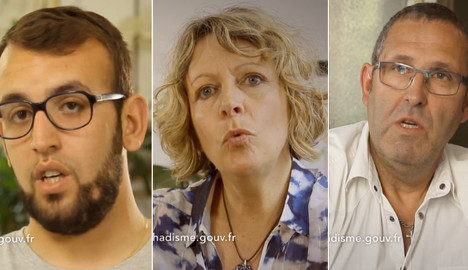 “I am doing this, because it makes me feel better and I want to call out to my son and tell him ‘We love you, your place is not there but here.”

These are the words of Veronique, whose 23-year-old son Quentin, converted to radical Islam before fleeing the family home in France to head to the Middle East a year ago.

After a family weekend, the young Frenchman told his parents he was going to Germany, but disappeared without a trace.

One month later he eventually called them. Although he declined to say where he was, the GPS on his phone revealed he was in Syria.

“Our son lived in a privileged environment. He loved music, sport and he used to do sketches…And today he is in Syria,” Veronique tells the camera.

She said the signs of his radicalisation are easy to spot in hindsight.

Her son converted to Islam a year before his departure.

He then dropped out of university and soon gave up playing the piano, because music was judged “a sin”.

At one point he refused to enter a church for his grandmother’s funeral and declined to eat Christmas dinner with family.

“We used to argue, we didn’t agree with him, but we wanted to keep talking. We thought over time he would soften,” she told Le Parisien newspaper.

Veronique is one of four parents of sons and daughters fighting jihad, who have joined the latest French government campaign to dissuade young French nationals from heading to the Middle East.

Excerpts from their accounts are to be broadcast as adverts on 20 French TV channels a,d internet news sites as part of the “Stop Jihadism” campaign.

All four were chosen because they had something in common – their children had converted to radical Islam as the government aims to show that the phenomenon does not just affect traditional Muslim families.

During the clips a number appears on the screen (0 800 00 56 96) that parents are urged to call if they need advice or to report a son or daughter who they fear might be heading down the same path.

“We need to change the view of society towards jihadism,” said Veronique. “Every young person who goes over there are different. It could be your neighbour, your cousin. It affects everyone.”

The producer of the adverts, Fabienne Servan-Schreiber, said the mothers and fathers expressed the pain of those who “didn't see anything” coming, and did not understand why their children had turned to radical Islam

Baptiste, whose daughter Lea, aged just 16 at the time, left with her boyfriend, is also part of the campaign.

“Lea’s departure happened on a beautiful day. She took a rucksack, a scarf and we haven’t seen her since,” he says.

“When she finally called us, she said, “Mom, Dad, This is going to hurt you, but I have gone…gone to Syria to join Jihad”.

“And then, the Earth fell from beneath my feet.

“Lea had a baby there, she set up her life in a world at war. She wanted to find a better world, but I think she ended up in hell.

“They stole our child from us,” says Baptiste.

The latest video campaign follows the government’s shock campaign released in January, where graphic images were published along with statements warning potential jihadists to the horrors of life in the Middle East.

But despite the French government's efforts the departures continue.

According to the latest figures from the government 134 French nationals have died in Syria, but the numbers leaving continue to rise.

Prime Minister Manuel Valls told RTL radio on Wednesday that there were more than 500 French citizens currently in Iraq and Syria.

There are also “hundreds, even thousands of youths affected by radicalisation,” he said.

“It is a considerable challenge for our society that requires us to mobilise families.”

The adverts are available on the government's anti-jihadist website www.stop-djihadisme.gouv.fr. which gives advice on how to spot radicalisation,  and tries to point out the flaws in slick jihadist propaganda.