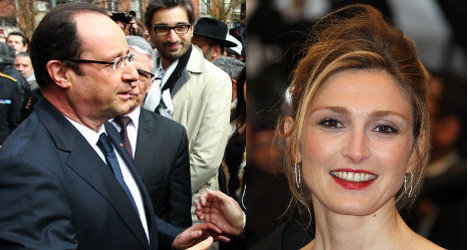 François Hollande and Julie Gayet who is desperate to stay out of the limelight. Photo: AFP

Two French celebrity magazines were ordered Tuesday to pay symbolic damages for publishing snatched photographs of
French President Francois Hollande and his actress girlfriend Julie Gayet at one of his official country residences.

A court ordered Voici and VSD magazines to pay 1,500 euros ($1,700) to each complainant for falling foul of strict French laws governing the right to privacy.

The photographs of the visit to the residence in Versailles outside Paris over the Easter weekend this year also showed Gayet's father and presidential official Jean-Pierre Jouyet and his wife, who are longstanding friends of Hollande.

All those pictured, with the exception of the president, had brought the legal action.

A court in the Paris suburb of Nanterre said the directors of the magazines were responsible “on a personal level” for the publication.

“This is not insignificant,” said Jean Ennochi, the lawyer for Gayet and her father.

“It's recognition of the right of the respect for private life. Photographs cannot be taken inside a private place, it's a serious intrusion,” the lawyer said.

The pictures were first published on April 10 by Voici, with other photos from the same series used by VSD a few days later.

Asked about the photographs during an interview with Canal+ television, Hollande said that for him “the pictures do not exist.

“They touch me but they should not concern me,” he said.

Hollande split with his former partner Valerie Trierweiler to be with Gayet, officially announcing the separation in January 2014.

The president has four children from a previous relationship with Segolene Royal, who is now environment minister in his Socialist government.