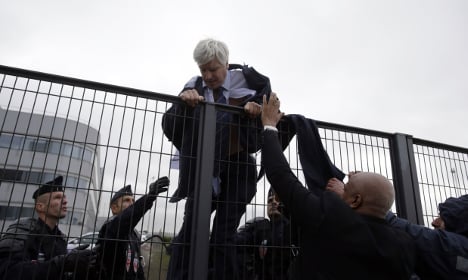 Air France's Pierre Plissonnier clambers over a fence to safety. Photo: AFP
Prosecutors have announced they are opening a criminal investigation into the violence at the Air France headquarters in Monday, which saw two executives forced to clamber over fences to escape an angry mob.
On Wednesday, Air France, which has launched its own investigation into the melee, identified 20 individuals they believe were behind the attacks on human resources manager Xavier Broseta and exec Pierre Plissonnier.
They were apparently identified after officials studied CCTV images from the scene and include those who attacked the two bosses as well as accomplices who helped the mob gain entry to the building where the company's board were holding a meeting.
The incident made headlines worldwide, leaving the government red-faced with Prime Minister Manuel Valls saying the “all France is in shock after the” after the incident, which he blamed on “thugs.”
“The only possible response is to prosecute, because these incidents were totally beyond the scope of union action,” Transport Minister Alain Vidalies told parliament on Tuesday.
On Tuesday, management denied a report in the Canard Enchainé weekly that the airline was also planning a further 5,000 job cuts after 2017.
“Air France denies these figures,” the company said in a statement sent to news agency AFP, adding there was “no plan concerning the evolution of staff in 2018, 2019 and beyond”.
The company shed 5,500 posts through voluntary departures between 2012 and 2014, and on Monday proposed 2,900 job cuts, believed to involve 300 pilots, 900 air hostesses and stewards, and 1,700 ground staff
Its new cost-cutting plan also includes measures to reduce long-haul flights, sell 14 planes and possibly cancel some or all of the new Boeing 787s it has on order. Air France, once a proud symbol of French elegance and technical know-how, is struggling to compete in the face of intense competition from global rivals, not least Germany's Lufthansa, and the combined forces of British Airways and Iberia in Europe.
The airline employs 52,000 people and has tried to convince its pilots, who earn an average of €150,000 to €175,000 a year at senior levels, to fly 100 more hours a year for the same salary.
But talks broke down last week.
Air France staff are highly divided, according to unions.
Not all support the pilots, who went on a two-week strike a year ago over the expansion of Air France's low-cost subsidiary Transavia.
The record-long strike cost the company more than €400 million and prompted accusations from the government that they were effectively holding the airline to ransom.
Beatrice Lestic, of the CFDT union, told Le Parisien newspaper this week that ground staff, stewards and cabin crew “feel they have made enormous efforts without ending up in a position to influence decisions”.
They felt helpless, she said, and were “now spectators to a crash in which they will be the first victims”.