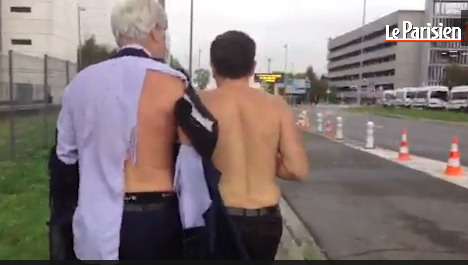 The timing for embattled President François Hollande is his Socialist government could hardly have been worse.

Just as France is desperately trying to boost investment from abroad, images of half-naked Air France execs jumping over fences into the arms of riot police were seen around the world.

The sight Air France-KLM's human resources manager Xavier Broseta and exec Pierre Plissonnier, being “almost lynched” as they fled a small mob of angry workers will hardly be filling foreign investors with glee at the thought of setting up in France. Of course, most international bosses will be fully aware of how “social dialogue” or labour relations and talks with workers can descend into militant action in France.

They will have heard all about the stories of “bossnappings” where workers effectively hold company chiefs hostage until they are satisfied they have got what they wanted.

They’ll also be aware of the lengths striking workers are willing to go to fight for their jobs and protect their livelihoods, whether its ferry workers blockading the channel Tunnel or farmers bringing cities to a near stand still.

Actions that if committed by youths in suburbs would have resulted in jail terms are generally accepted in France if they are linked to a labour dispute.

And at times it's hard not to commend their exploits and refusal to bow down, not least because it has proved to be successful.

But on Monday a small minority of workers took their protests, the likes of which you can’t imagine in the UK or the US, a step too far.

The “physical violence” against the two company bosses was condemned not just by Air France, but by the government and by unions themselves and finally on Tuesday by President François Hollande.

“The president described the violence as ‘unacceptable’ and that the incident “threatens” France’s image.

“Social dialogue matters and when it's interrupted by violence and disputes take on an unacceptable form, it can have consequences for the image and attractiveness of a country,” said Hollande

Earlier this year the president refused to condemn protesting farmers who had raided supermarkets of foreign products and were accused of attacking Spanish lorry drivers bringing produce into France.

But back then there were no images of shirtless executives from the country's flagship company. Medef, France’s leading business organisation said the images would be “tragic” for France.

“This is bad in terms of image for both the company and for France,” a source at Medef told AFP.

“Air France is not a small company in the Gers, it’s the emblem of the country.”

“We are very active in trying to sell France and we are trying to sell the reforms that the government have made. This is just tragic,” the source added.

But it’s not just business groups who are ashamed at the images.

Editorials in many French papers carried the same message with many concerned that the idea of French labour relations had been tarnished.

“The case of Air France symbolizes all the flaws and impasses of social dialogue in France,” said Christophe Alix in the left-wing Libération newspaper.

“A few hundred fired-up workers crossed a symbolic line,” wrote François Vidal in business newspaper Les Echos. “One that separates a modern society where conflicts are resolved through dialogue and on the other side a civilization where it’s just the rule of the strongest.”

“In a country where reform is nearly impossible, the future of Air France is become a national issue.” But others argue that the images have overshadowed the real injustice that is the cutting of 2,900 jobs without adequate negotiations.

“There are two types of violence here. One against the execs, and the other in the way the job cuts plan was announced. Making 2,900 people redundant is also a form of violence,” Stephane Sirot, French author and specialist in labour relations told The Local.

“What we saw yesterday is an accumulation of various things. There was last year’s pilot’s strike, there are growing differences between unions and the directors play on these differences.

“It’s a tense situation and it can result in these extreme actions.”

Other videos have emerged from Monday's meeting showing tearful Air France staff pleading with company chiefs to listen to their concerns. “We have not come here for confrontation,” said one visibly distressed woman.

“There’s no doubt it’s bad for the image of France and it’s a reminder of the 1960s when ‘bossnappings” were very common.”

“But foreign companies must remember these incidents are very rare. It will have an impact, but it won’t last very long,” said Sirot.

Bob Lewis from the Franco-British Chamber of Commerce in Paris told The Local the French public were running out of patience with the action of union hardliners.

“The unions in France have always been well supported by the French pubic, but in the past year, the burning of tyrs in Calais and the exhibition at Air France, I expect the tide of support to diminish.

“Will it affect investment in France? Not at all.”

@TheLocalFrance They're lucky they didn't go against the Athens Public Transport union back in '92! pic.twitter.com/ETdWA2CKuw