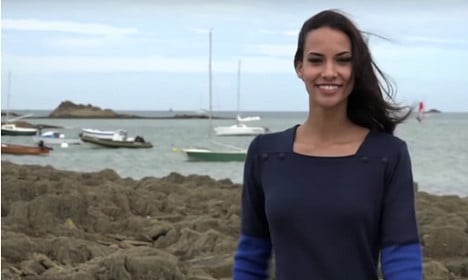 It was a brief reign for Eugénie Journée. Only elected Miss Brittany on Saturday evening, the 23-year-old law student from Rennes now finds herself on the royal scrap heap.

She was stripped of the title because “she had breached the professional code of ethics” the organizers of the Miss Brittany event told 20 minutes newspaper.

It has emerged she had broken the rules by publishing a topless image of herself on her Facebook page (see below), something prohibited by the organizers of the Miss France contest.

The French Twittersphere was particularly bemused and angered by the decision with most people shocked that the photo below could result  losing the crown.

“Deposed because of this photo? Seriously? Aren't you ashamed Sylvie Tellier,” said one tweeter in a message directed at the head of Miss France

Another tweeter wrote: “What! You can only see her feet!”

Others said they would boycott the show.

“Your swimming suit parades are more sexy and vulgar than this innocent picture. I'm boycotting!” one irate Twitter user said on Tuesday.

“The problem isn't whether the photos are shocking or artistic. It's the act of going nude that we punish,” Miss France director Sylvie Tellier told Metronews.

“It's a shame because she is very pretty. She was one of my favourites,” Tellier added.

Journée had beaten out 13 other contestants at packed hall on Saturday, winning the right to compete in the Miss France 2016 finals in Lille in December – no small thing given the enduring and immense popularity of the event in France.

But after the emergence of the photo of Journée, it is second-place getter Léa Bizeul who will now step into the breach, the competition organizers quickly announced.

Perhaps those organizers were keen to avoid a repeat of the 2013 controversy when Norma Julia was crowned Miss Roussillon after the mysterious disappearance of one of the competition favourites.

But after Julia was discovered to have taken part in a photo shoot in scantily clad underwear she was dethroned.

And in 2011, Laury Thilleman, the then Miss France champion, was also dethroned after a similar semi-naked photo shoot for Paris Match magazine.