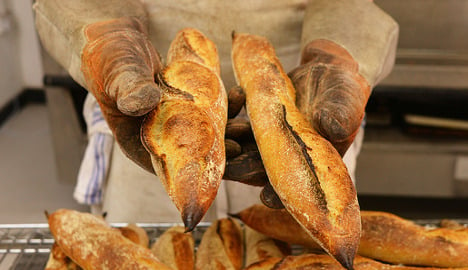 The bakers (boulangers) in the Landes department of south-western France had flouted the law by opening every day of the week.

To those from outside France that may seem like an obvious move for a shop, but opening seven days week meant the bakers were flouting France’s strict laws on opening times for artisan trades.

A decree dating back to 1999 states that the boulangeries must close on at least one day. A court in Dax handed out €500 fines on Monday and told the bakers to fall in line with the rules, if they hadn’t already.

The ruling left a bitter taste in the mouths of the bakers who feel aggrieved they are not allowed to operate.

“We are business owners who are disgusted to be in France,” baker Stephane Moreau told 20 Minutes news site. “We are going to work less and therefore pay less VAT and less payroll taxes and if necessary we will have to lay off staff.”

Another of the convicted bakers told RMC radio: “I have been left with a criminal record just for baking bread. Tomorrow I will have to lay people off.”

“France is doing everything to find jobs for those who are looking but me, because I make bread, I have to lay people off,” said the baker.

One of those bakers fined was Stephane Cazeneuve, who made headlines around the world in February when it emerged a court had ordered him to close up on Mondays.

Cazeneuve, a former holder of the “Best Baguette in France” award, said being forced to close on Monday’s would cost him €250,000 meaning he would have to lay off staff. (French baker Stephane Cazeneuve, one of those told to shut up shop one day a week.)

“I have been open seven days a week for three and a half years. I have created jobs and wealth. I don’t know why they preventing me from doing it,” he said at the time.

Summing up the frustration of those backing the baker former PM François Fillon said: “The fact that working in our country can be considered an offence and that the passion of a craftsman can be restricted, should alert us to the absurdity of our system.”

The conflict comes at a time when the divisive issue of whether shops should open seven days a week is still a hot topic.

The Macron law, named after Economy Minister Emmanuel Macron, which allows for more Sunday openings has come into force but many are firmly against it, including the mayor of Paris Anne Hidalgo.

While Paris has new designated International Tourist Zones allowing shops within the boundaries to open every Sunday, Hidalgo has vowed to have the law overturned.

Some however said it was only right that baker’s be forced to close, despite a loss of takings.

Eric Scherrer from the retail trade union CLIC-P, told The Local that French laws must be respected.

“There is a rule in place that says bakers and other professions in the food industry must close for at least one day a week. It’s because it’s an artisanal trade where people can work a lot, much more than the legal limits,” he adds.

“These people need to have a rest day each week. We can’t just allow them to work non-stop. It’s absolutely necessary that both bosses and employees have a day of rest.”