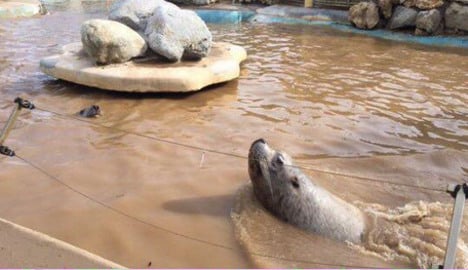 The deadly storms that hit the southern coast of France this weekend, left Marineland, the largest sea park in Europe and the ‘pride of Antibes’ ravaged.

After the deluge of flood water swept down from the hills, penguins and sea lions found themselves in mud-filled pools and there were reports that stingrays and other species were found dead in the car park.

Others claimed sea lions and tortoises were able to escape from their enclosures.

The waves of 1.5. to 2.5 metres inundated some aquariums, killing stingrays and sharks, while a number of turtles remain missing.

One turtle was found this morning trapped in the dolphin’s filtration system.

Opponents of the park including the animal rights group the Brigitte Bardot foundation, which called it a ‘prison’ on Twitter, are suspicious that not enough has been said about the whereabouts of the killer whales, which are one of the park’s main attractions along with Mediterranean stingrays and turtles.

But park chiefs dismissed the suspicion.

Marineland manager Bernard Giampaolo told 20 Minutes news site: “There have been some losses, but our killer whales are not dying on the parking lot as some people are saying here and there. The situation with the animals is beginning to stabilize.”

“We have no electricity, no flowing water,” said park director Bernard Gianpaolo, as dozens of firemen worked to pump out water blocking filtration systems at the park.

The park was as unrecognizable as the campsites and woodlands in the surrounding area that were also left devastated by the storms, which left 19 people dead.

Now completely submerged in muddy water, over 90 percent of the filtration machines that make sure the pools are suitable for the animals have been destroyed, along with the park’s tropical fish tanks.

Only the two performance stages were able to withstand the force of the storms.

The park has been closed until further notice.