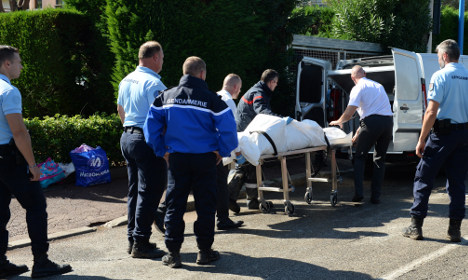 One of the bodies of the 17 Riviera flood victims is taken away.Photo: AFP

With 19 dead as of late Monday afternoon, including one Briton, questions were bound to be asked once the flood waters had receded.

Why in modern France, a first world country, with good infrastructure, weather warning systems, fully-equipped emergency service teams, and prevention measures, did a series of violent storms prove so deadly?

Some suggest what happened overnight on Saturday was simply unprecedented.

In a matter of hours on Saturday night Cannes saw 195 mm of rainfall, there was 178mm in Mandelieu-la-Napoule, 100mm in Valbonne and 200mm in the town of Biot, which is the equivalent of two months rainfall.

The rainfall turned rivers and streams into torrents that washed cars out to sea and created what local officials described as “apocalyptic scenes”.

While the president of the Alpes-Maritimes department Eric Ciotti said we have to admit a “form of powerlessness against nature”, others are pointing the finger of blame at the country’s weather agency Météo France, making it the prime target.

Although weather warnings were in place, the ferocity of the storms took everyone by surprise and some are now blaming the country’s meteorological service Méteo France.

On Saturday afternoon Météo France had issued Orange alerts for storm and flood warnings for six départments including Alpes Maritimes, where most of the devastation took place.

Orange alerts –  the second highest level of warning –  are regularly issued in France when storms are forecast. They advise members of the public to be vigilant, especially when travelling.

But some local politicians claim the Orange warnings are issued so often that they have become “trivialized” and Saturday’s storm clearly merited the issuing of a red warning.

“We have about 20 Orange alerts each year. They’ve become so trivialized that no one takes the precautions seriously,” said Mayor of Nice Christian Estrosi.

But Méteo France have issued a staunch defence of their actions, simply saying that with the technology they have available it would have been impossible to predict the fact the storms would intensify to such a deadly degree.

Pascal Brovelli, the deputy director of forecast operations defended his organization against accusations of negligence.

“Thanks to the vigilance, the public were informed. Civil safety authorities, fire fighters and regional services were all aware,” he said.

“You have to look at the amount of rainfall that fell. It was record-breaking.”

“Our forecast system allows us to chart the zone that was going to be affected by the violent storms, but given the current state of our information, it was impossible to specify that one of the storms would affect such a precise area with such intensity.”

'Just too much concrete'

But while some pointed the finger at Météo France for not doing enough to prevent the deaths, others said the roots of the tragedy lay in the amount of intense construction the Riviera has seen in recent years, which has changed the nature of the area.

Several of those who died were trapped in underground car parks that have become necessary due to the sheer numbers of people living on the Riviera and the need to maximize space.

Michelle Salucki, the mayor of the town of Vallauris-Golfe Juan, where three people died after becoming trapped in a flooded tunnel, said “the concreting of town centres” was a factor in the disaster.

“It's true that we encouraged urban concentration and the concreting of town centres through the law,” she said, adding that the land was not able to hold the flood water and instead it simply flowed down towards the sea taking with it everything in its path.

Cécile Duflot from France’s Greens group also denounced the fact that many buildings on the Riviera are made “waterproof”, which prevents flood water from being able to run away freely.

“There were errors committed 50 years ago when authorities were handing out building permits,” Eric Ciotti, president of the Alpes Maritimes Council added.

While many blamed forecasters or constructors, others pointed the finger at individuals, particularly those drivers who tried to save their cars and suddenly became trapped by flood waters in underground car parks, with no escape route.

The three who died in their car in the tunnel at Vallauris-Golfe Juan were also said to have ignored warnings by other members of the public not to continue down the road.

When French president François Hollande visited various parts the Riviera on Monday he suggested that an environmental message had to be heard.

“There have always been always catastrophes. But their rhythm and intensity are on the increase,” he said, urging that environmental “decisions be taken” as France prepares to host UN-led climate talks in December on a post-2020 pact to curb greenhouse gases.

However his own Foreign Minister Laurent Fabius dismissed that idea on Monday saying: “We cannot establish a link between climate change and this particular phenomenon.

But he did stress that climate change meant that these kind of freak storms are much more violent and more extreme than before.”

“If we don’t act quickly and forcefully enough, then this well happen again.”

That is the major concern among residents and officials, who say it will be months before the French Riviera returns to normal.