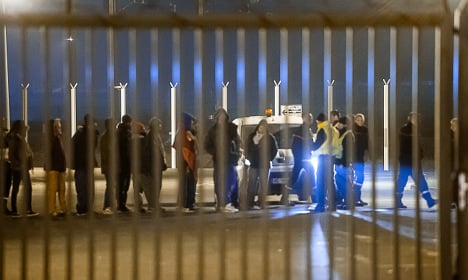 Services had been suspended for just over seven hours throughout the night, but resumed early on Saturday with a Eurostar train from England entering the tunnel at 8:05am (0605 GMT), a Eurotunnel spokeswoman told AFP.

The tunnel had been closed shortly after midnight (2230 GMT) when a crowd of migrants stormed the entrance to the tunnel near the northern port city of Calais.

As Europe struggles with its biggest migration crisis since World War II, thousands of refugees and migrants have made their way towards France’s northern coast in the hope of finding passage across the Channel to England.

Eurotunnel said the tunnel had been closed as the security forces went in to try and track them down.

“At around 12:30 am (2230 GMT on Friday), around 100 migrants forced a closure and the entry of security agents into the tunnel,” a spokeswoman told AFP early on Saturday, saying police were at the site.

“We have suspended the service.”

Fabienne Buccio, head of the Pas-de-Calais region, said the migrants had managed to get a third of the way through the tunnel, which stretches some 50 kilometres (30 miles).

“The migrants went quite far into the tunnel, about 15 kilometres,” he told AFP.

During the incident, 10 people – seven of them migrants – suffered minor injuries, a firefighter at the scene said.

But by Saturday morning, services through the tunnel, which include the Eurostar train service and a shuttle service for vehicles, resumed.

“We were able to send a first Eurostar from England at 8:05am followed by an empty freight train,” the Eurostar spokeswoman said.

“Services will resume gradually and we will have a departure from the French side at around 10:00am,” she said.

In August, the interior ministers of France and Britain signed an agreement to set up a new “command and control centre” to tackle smuggling gangs in Calais.

The move came after several weeks of attempts to penetrate the sprawling Eurotunnel site, with migrants trying several times a night to outfox hopelessly outnumbered security officials and police.

Thousands of people from Africa, the Middle East and Asia are camped in Calais in slum-like conditions, and at least 13 have died since June 26 trying to cross over into Britain, where many have family and work is thought easier to find.