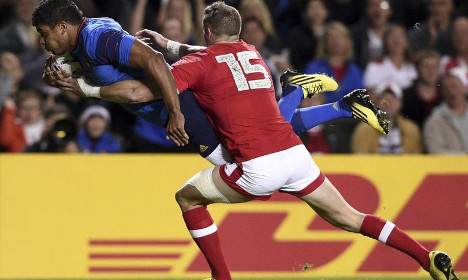 Frederic Michalak became France's record World Cup points scorer on Thursday as the French took a massive step towards the quarter-finals with a 41-18 win over Canada.

Michalak earned the man-of-the-match award in front of a record crowd for Stadium MK of 28,145 including Prince Harry.

France's far from convincing win — the Canadians came back from 17-0 down to 17-12 — sets them up for their final Pool D clash against Ireland on October 11 in a probable  decider as to who tops the table and avoids a probable clash against New Zealand.

The Irish, unbeaten in two games so far, play Italy on Sunday.

France coach Philippe Saint-Andre said that while there had been a spell of poor play by his side he was pleased overall.

“The end result is three games, three wins and 14 points from a possible 15.

“As a group we are eager to go far and we have some huge games to come starting with Ireland.”

A typical piece of visionary brilliance by Michalak in the fourth minute opened up the Canadian defence.

He handed off one of the props dismissively, burst free, drew his defender and with a sublime sleight of hand passed the ball to Wesley Fofana who ran the ball in.

He broke it in the 15th minute slotting over a penalty to make it 10-0. The Canadians' evening worsened as captain Tyler Ardron had to go off with a knee injury.

Michalak and Fofana nearly combined for a second try in the 24th minute. Michalak placed a cheeky cross field kick into Fofana's path over the tryline but the centre could not quite gather the ball to touch it down.

However, the French did not have to wait long to add to their tally. Hooker Guilhem Guirado bundled over with Michalak adding the extras for 17-0.

The Canadians struck back almost imediately. French debutant Remy Grosso was beaten in the air and the ball was eventually worked brilliantly out to the other wing where DTH van der Merwe used his speed to outpace the defence and touch down.

It took van der Merwe onto 19 Test tries and his third in three games at this World Cup.

Hirayama converted to rousing cheers, including several spectators dressed as Canadian Mounties, for 17-7.

The Mounties were whooping and hollering minutes later as unbelievably the Canadians scored a second try. Hooker Aaron Carpenter planted the ball on the line — though Hirayama missed the conversion — for 17-12.

The French pulled themselves together and responded with a try two minutes from the break, the ball worked by Bernard Le Roux to lock Pascal Pape for prop Rabah Slimani to finish it off. Michalak converted for 24-12.

Hirayama reduced the deficit two minutes into the second-half to make it 24-16.

The fly-half deservedly drew the Canadians within a converted try of the French, slotting over another penalty as the clock ticked over into the 55th minute.

Michalak made it 27-18 with another penalty.

The French grabbed their bonus point fourth try when Pape squeezed the ball through a mass of bodies and Michalak converted for 34-18 with 13 minutes remaining.

The man advantage worked for Grosso who went in at the far left hand corner to mark his debut with a try.

“To score a try is always a pleasure, and what is even more pleasing is that my mate Remi (Tales) set me up,” said Grosso.

“Emotion welled up inside me.”