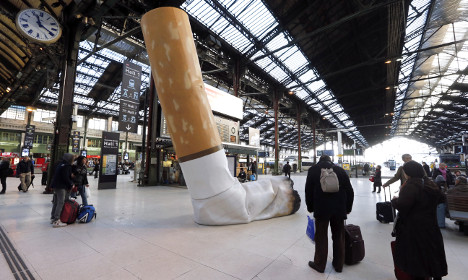 A giant cigarette butt at the Gare du Lyon in Paris. Photo: AFP
From Thursday October 1st dropping a cigarette butt on the streets of Paris could cost smokers the price of around ten packets of cigarettes.
From now one anyone caught tossing away the fag end after smoking the cigarette will be forced to pay €68, almost double the previous €35 fine.
Paris Town Hall’s cleanliness tsar Mao Peninou is taking the fight against cigarette butts seriously – and it's no wonder. There are 350 tonnes of mégots, as they are known in French, collected each year in Paris.
“These fines aims to give Parisians and visitors a sense of responsibility so that they also become actors in keeping the city cleant,” said Peninou.
The problem of cigarette butts was made considerably worse ever since a smoking ban in public places was introduced back in 2008, forcing many more people to begin puffing outdoors. The same fine of €68 will now also be handed out to those who do not clean up their dog's mess.

In the mean time, the Town Hall will roll out 30,000 new ashtray bins to encourage smokers to dispose of their cigarettes properly.
Peninou added that Paris's current “green brigade” of 100 staff tasked with enforcing the rules would be expanded throughout the year.
In the run up to the new fines coming into force a team of officials alerted the public by handing fake penalties to smokers.
The Town Hall has also appealed to cafes and bars around the city to help them raise awareness of the new measure.
“Solutions exist and must be implemented,” said Peninou. “For example, the installation of mobile ashtrays front of the buildings, placing ashtrays on tables in outdoor areas where smoking is allowed.”
Smokers in the ninth arrondissement of Paris, meanwhile, have been offered recycling bins for their cigarettes, in a separate initiative to encourage a cleaner city. Those behind the move, a US company called Terracycle, say that a cigarette takes 12 years to naturally degrade and that just one is enough to contaminate 500 litres of water.
In Paris, penalties for public littering are rarely enforced – with just over 25,000 fines given out last year – mostly for people who left their rubbish bins out too long.

SEE ALSO: Paris vows it's finally ready to clean up its streets