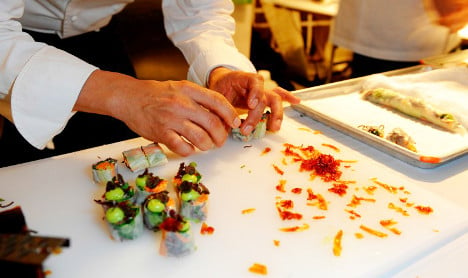 Is France ready to accept vegetarianism? Photo: AFP
Ask any vegetarian in France about their dining lives and they're bound to tell you two things – Firstly “It's difficult” and secondly, “it's a hell of a lot better than it used to be”.
Indeed, there are options. The healthy eating guide Happy Cow lists 1,228 restaurants in France that are 100 percent vegetarian and vegan, with 218 of them in Paris.
While restaurants may be adapting, those who cater specifically to France's vegetarian community say that there's never been a better time to ditch meat.
“This is a cataclysmic moment right now in the vegetarian scene in France,” says Sati Leonne Faulks, a Californian, who is set to open up a vegan cafe in Paris next month.
His new project, called Wild and the Moon, will open in the Marais district of Paris – selling cold pressed juices, smoothies, and a totally vegan and gluten-free menu.
“Vegetarianism seeped into France's mainstream two years ago and vegetarian and vegan places are sprouting up all over the place… but it's still infantile.”
Faulks says restauranteurs have only been trying to keep up with the trend so far, with much of the offerings “lacking taste and soul”.
Vegetarians living in France also testify to the fact  that life has become a little easier for them. (An asparagus-based dish at Au Passage. Follow on Instagram here for more)
Clare Tynan, a 27-year-old translator in training, says that she's noticed a drastic change over her five years in France.
“When I first met my French boyfriend's parents they told me they'd never met a vegetarian before,” she told The Local.
“They asked if I ate eggs, if I drank milk… I had to explain that it was only meat that I didn't eat.”
The Briton said that she has had similar reactions in Paris, but also when she lived in Lille, Rennes, and Belfour.
“It's so much easier in the UK, where you can easily pop into a supermarket and grab a vegetarian sandwich. But in France, I remember going into a restaurant in Strasbourg and asking for a tartes fromage without lard and they just said 'No, we don't make it like that, we can't change it',” she says.
READ ALSO: Eight top vegetarian restaurants in France (Why not try a vegetarian baked stuffed portabello today? Photo: Jean-François Chénier/Flickr)
And despite the occasional comment comparing her to “a Muslim who doesn't eat pork”, she says life has become much easier when it comes to finding non-meat alternatives in the supermarkets.
Those behind the scenes in the restaurant business, meanwhile, are adapting to their diners' demands.
Edward Delling-Williams, the head chef at Au Passage in the 11th arrondissement of Paris, says that things have changed a lot in recent years.
“The words for vegetarian and vegan are almost the same in French [végétarien and végétalien respectively] – the idea isn't part of their culture, even though there is a big push for it around the world,” he tells The Local.
“But having said that, we do get vegetarians in a lot more now than when I started three and a half years ago.” (A Pea Orgetto/”Risotto” from Au Passage/Instagram)
The head chef says that the price of meat and the known environmental effects that the farming of meat have proven reason enough for people to think twice.
The result has been a change of tack from France's chefs, who are beginning to move away from the traditional fish-based starter, meat-based main, and sweet dessert – preferring instead share dishes and ever-changing menus. Or indeed, featuring vegetables as a replacement for meat in a main course, such as his own broccoli tartare or a beetroot pavlova.
And with a menu that has over fifty percent of dishes being fish-based or vegetable-based, Delling-Williams says he's well equipped for the ever growing number of “pescatarians” [those who don't eat meat but will eat fish].
But how far will things will really go in France. Will the vegetarian enlightenment take over France and see those traditional dishes like Maigret de Canard and tete de veau consigned to the past?
Sati Leonne Faulks believes it's going to be hard for the vegetarian scene to really flourish.
“It's like coffee. Four years ago, the French really took to it. Everyone wanted a good, filtered coffee. But even so, there will always will be classic places that serve shitty espressos with a croissant,” he said.
“It's like with food. France is a solid vault of charcuterie, cheese, and wine… No matter what happens with vegetarian food, it can only ever grow to a level where it's just another option. It will never revolutionize the culture of French food.”