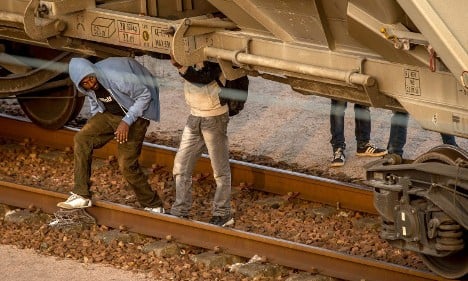 Refugees in Calais trying to get to the UK. Photo: AFP
The drivers with France's largest labour union, the CGT, published an open letter calling for action following the deaths of at least 13 migrants in five months as they tried to access the tunnel.
“Today we are afraid. Afraid to start, afraid to finish, afraid to drive, afraid to hit, to crush, to electrocute, to reduce to a pulp a wretched, disinherited, ill-fated, damned of the Earth,” wrote the drivers in the letter seen by AFP.
“We do not want to, and above all cannot, continue to do our job in such conditions of stress, anxiety and stomach-clenching fear.”
The most recent reported death was on Wednesday when an Eritrean in his twenties was found dead after being hit by a freight train.
The day before a young Iraqi was found dead crushed by pallets in a truck near the port of Calais.

(Photo: AFP)
As many as 4,000 migrants, mostly from Africa, Afghanistan and Syria, are camped in Calais near the Channel Tunnel entrance.
They initially tried to smuggle themselves onto trucks crossing on ferries to make their way to Britain, a promised land for them, but changed tactics as security was stepped up.
In July, hundreds tried to storm the Eurotunnel site nightly to enter the undersea tunnel and several paid with their lives, but the figures have fallen amid tighter security.
“How many more will be injured? How many more will die? Are we going to have to get used to these morbid figures? How long will we be haunted during our working hours, our rest, by these surreal images?” asked the train drivers.
They also said they felt they were working in a warzone with the tunnel site now surrounded by barbed wire, armed police and dogs.
“For the umpteenth time… we call on government, local actors, all decision-makers, to come to our aid as quickly as possible.”
A spokesman for Eurotunnel said he “understands the emotion described.”