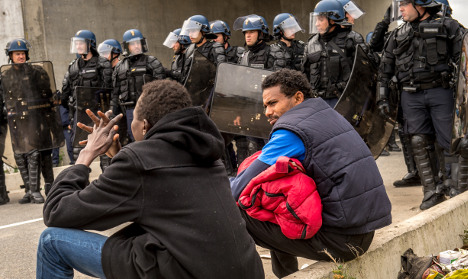 Refugees in Calais wait as police clear out their camp. Photo: AFP
“A migrant was found dead by a security guard at around 1am. He was hit by a freight train,” said the official.
He said the man killed was an Eritrean in his twenties.
The death comes after that of a young Iraqi on Tuesday who was found dead, crushed by pallets in a truck near the Calais port.
Around 3,000 migrants, mostly from Africa, Afghanistan and Syria, are camped in the French town of Calais near the Channel Tunnel entrance.
They initially tried to smuggle themselves onto trucks crossing on ferries to make their way to Britain, a promised land for them, but changed tactics as security was stepped up.
In July, hundreds tried to storm the Eurotunnel site nightly to enter the undersea tunnel and several paid with their lives, but the figures have fallen amid tighter security.
However, Calais is only a footnote in the migration crisis sweeping Europe as a flow of refugees from conflict-torn Middle Eastern nations risk their lives on a deadly journey to reach the European Union.