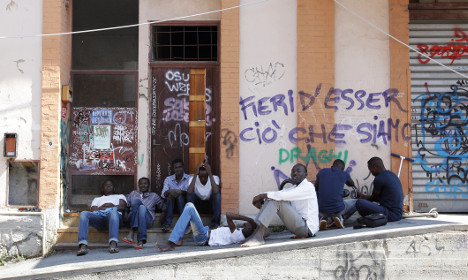 Refugees at a train station near the France-Italy border. Photo: AFP

A camp on the Italian side of the Italy-France border was cleared on Wednesday as police evicted refugees who had called the area home since June.

Some 30 migrants and 20 Italian activists, who had been warned ahead of the evacuation, moved to the coastal rocks before dawn to be well clear once police arrived at nearly 6:30am, deputy police chief Giuseppe Maggese said.
The camp was cleared because its occupants were using electricity and water without paying for it, a police spokesman told AFP.
A cordon of about thirty policemen stood along the shoreline in front of the migrants, some of whom were threatening to jump into the sea, while others held up a banner in English reading: “we want freedom to cross the border.”

“They have to move, I'm not sure at the moment where they'll be taken… but this situation could not go on. We understand why they are protesting but the camp was illegal,” Ventimiglia mayor Enrico Ioculano told Italian media.
The camp holds up to 250 people depending on the day, according to local officials, who said a number of people had left on Tuesday afternoon after news of the impending evacuation broke.
Tents and personal belongings from the camp — which sprawls under an overpass some 100 meters from the French border — were being removed by garbage trucks and bulldozers.

Ventimiglia, which became a flashpoint at the start of Europe's migrant crisis earlier this year, has acted as  a bottleneck for the France-bound refugees who arrived in Italy.
While officially France has called for the Schengen agreements to be “scrupulously” respected by all EU countries, the reality is that Paris has done anything but, at least when it comes to this border.

French authorities have long been implementing controls to try to stem the tide of refugees crossing the border, with the result being that hundreds have been taken back to Italy.