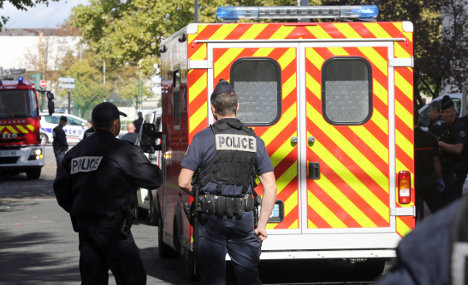 Do you know which number you should dial to call the police? What about firefighters? Photo: AFP

France has a unhealthy amount of numbers you can call in an emergency.

In fact we’ve counted 12 in all, with the latest number being 3117 which was brought in after the terror attack on the Amsterdam-Paris train for members of the public to report any suspicious behaviour.

There are also other numbers to report all kinds of emergencies.

For the coastguard its 196, to report an aeronautical emergency its 191 and for missing children its 116000. Then there's 115 for emergency shelter and 119 to report children in danger.

You can call 222 to report dog poo on pavements and 666 for rude waiters. Just kidding of course..

But the main problem is that the police (dial 17), firemen (dial 18) and ambulance crews (dial 15), known as Samu all have different numbers in France.

It’s a tough task for anyone to remember the different numbers, let alone when facing the panic of an emergency. The US emergency number 911 and the UK’s 999, which links callers to police, firefighters and ambulance is far easier to recall.

And thankfully French firefighters are now in agreement.

At their annual meeting recently they called for the numbers 15, 17 and 18 to be ditched and replaced by just 112, which is already the functioning SOS number for all services anywhere in the EU.

“The emergency numbers are blooming and the citizens don’t understand anymore,” Eric Faure president of the national federation of firefighters (FNSPF) told his members recently. For him the move to one emergency number would help improve “clarity, inefficiency as well as cost savings.”

In fact estimates by the federation suggest as much as €100 million could be saved each year on operating expenses.

“Earlier this year the new number 196 was created for maritime rescues. It annoyed us. When we should have one common number they are creating more,” Firefighter chief Eric Flores told the FNSPF congress earlier this month.

“The FNSPF believes that the proliferation of emergency numbers in France is confusing for the public and is counterproductive,” it said in a statement.

The federation “believes that 112 has become the only emergency number in France.”

At the moment there are around 100 emergency control centres dealing with calls to firefighters on 18, that’s added to the 400 operated by the police, gendarmes and Samu throughout the country.

But firefighters want to set up between 10 and 20 mayor centres around France to receive and sort calls to the number 112.

That number is currently a European emergency response number which can be dialed in all member states of the EU to alert police, ambulance and fire and rescue services.

By housing control centres under the one roof the FNSPF believes the response times can be cut and information between the different authorities can be better shared.

Let’s hope the firefighters get their way.