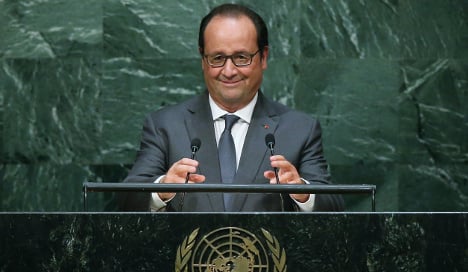 France on Monday gave cautious backing at the United Nations to a call from Russian President Vladimir Putin for a “broad coalition” to fight the Islamic State group in Syria.

Speaking to the UN General Assembly, French President Francois Hollande called such a coalition “possible, desirable, necessary” but said it would have to have “a clear basis, otherwise it would never come to light.”

Putin likened his proposed coalition to the “anti-Hitler” alliance that fought together during World War II and said Muslim countries “should play a key role.”

“We must address the problems that we are all facing and create a broad anti-terror coalition,” Putin said in his first to the UN General Assembly in a decade.

Hollande used his address to rule out President Bashar al-Assad from a solution to the Syrian conflict, saying it was impossible to make “the victims and the executioner” work together.

Russia and Iran have both called for the Assad regime to remain in place to fight against jihadists.

Hollande blamed the Syrian regime for the chaos in the country and denounced what he called the “tragedy” of terrorism and dictatorship.

The hundreds of thousands of refugees fleeing Syria for Europe are not only fleeing war but “fleeing the regime of Bashar al-Assad,” he said.

“Still today it is the same regime which is dropping bombs on innocent civilians,” he said.

“It's not because we have a terrorist group (Islamic State) that itself massacres, kills, rapes, destroys the heritage of humankind that it means there is a pardon for the regime that created this situation,” he said.

'Too late for World if no climate deal in Paris'

Reaching a successful climate deal in Paris at the end of the year is the last chance to save the planet, France warned the United Nations Monday.

Without “this decision in Paris… it will be too late for the world,” President Francois Hollande said in his address to the General Assembly.

The UN-led conference in Paris, which starts at the end of November, aims to seal a wide-ranging agreement to limit the worst effects of climate change.

Hollande sounded a note of optimism after China and the United States signed a “joint vision” ahead of the Paris summit, and China committed to a domestic “cap and trade” carbon exchange.

“We have moved forward over recent months,” he said.

“Very strong declarations were made by those countries who are most responsible for global warming… the United States and China, which undertook commitments towards changing the situation.”

He also pledged that France would increase its financial commitment on climate from three billion to €5 billion ($3.4 to $5.6 billion) between now and 2020.