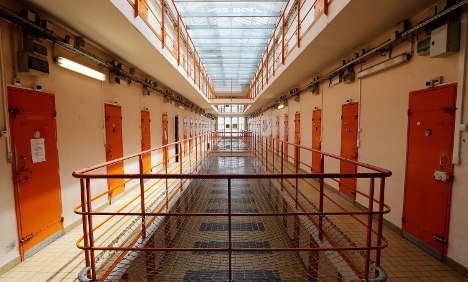 The man did not return from a temporary leave of absence from a Paris prison last week. Photo: AFP
The man, who was serving time for armed and violent robbery, was granted temporary leave of absence from the Chauconin-Meaux prison in Seine-et-Marne, east of Paris.
Authorities were confident that the man would return on time, just as he had done several times before.
But as his curfew rolled around on Sunday the September 20th, it soon became clear he had failed to return.
What is perhaps concerning authorities the most is that the escaped man reportedly told fellow inmates that they would “soon be hearing about him”, reported Le Point newspaper.
While police have launched an immediate manhunt, at least one official has spoken out of their concern that a radicalized prisoner is at large.
Republican party MP Eric Ciotti called on France's Justice Minister Christiane Taubira to explain why a known radical Islamist could be granted a temporary leave of absence from prison in the first place.

France has a troubling history when it comes to radicals who have served prison time.
Cherif Kouachi, one of the two brothers who killed 12 people during the January attack on satirical weekly Charlie Hebdo, is believed to have developed more extreme radical beliefs while serving a three-year prison sentence.
While behind bars at the Fleury-Merogisou prison, Kouachi met Amedy Coulibaly, the repeat criminal offender who gunned down a policewoman in southern Paris, followed by four Jewish shoppers in a hostage drama at a kosher supermarket.
Both men became influenced by the views of Djamel Beghal, a renowned figure of French Islamist extremism on a ten-year prison sentence for planning suicide bomb attacks and plotting to destroy the US embassy in Paris in 2001.
Cherif Kouachi's case is similar to that of Mohammed Merah, the perpetrator of the 2012 Toulouse and Montauban shootings which led to the death of seven French soldiers and Jewish civilians, including children.
French investigators at the time described how during the “confession” made by Merah as police officers negotiated with him during the final siege, he told them his path to radical Islam began while serving a prison sentence for robbery.