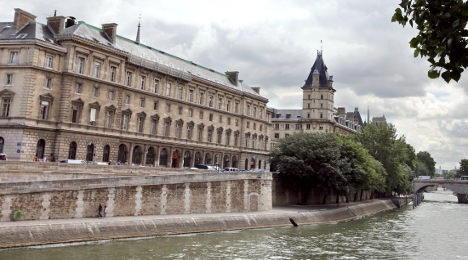 36, Quai des Orfevres, the home of the Paris police HQ, where a Canadian was raped. Photo: AFP
The tourist, who claims she was raped after meeting Paris police officers in a bar last year, on Monday began reconstructing the evening's proceedings before a judge ahead of the trial. She was joined by the suspects, who in turn offered their version of events.
The “confrontation”, which is expected to last three days, often occurs in rape and murder trials in France.
This alleged rape has sent shockwaves across France and abroad since it first made headlines, most recently after more than 100 police officers were subjected to DNA tests earlier to determine if they should join the two policemen already charged with gang rape.
All 120 police officers and civilian staff who were present in the building on the night the rape took place in April 2014 have been tested, with one source telling Le Figaro that the results were still not in.
Four DNA traces were found on the victim or on her clothes, and so far three have been identified – those of the two officers charged, and that of a third officer who is a witness in the case.
The then 34-year-old Canadian met the officers during a night of heavy drinking at the Irish pub frequented by police from the headquarters, which is widely known in France by its address: 36, Quai des Orfevres, judicial sources said.
They said she agreed to follow them to their workplace, which lies just across the Seine from the pub in the Saint-Michel tourist district. Up until this point in the story, the suspects agree that this was true.
Everything after remains unproven, but the case looks shaky on the officers' side, with several accounts of deleted cell phone information.
The woman registered a criminal complaint soon after the alleged assault.
One policeman has admitted to having consensual sex with her but denied rape. A judicial investigation was launched and the accused are also facing a probe into tampering with the scene of a crime.
A source close to the investigation said the woman's spectacles and stockings disappeared after she filed the complaint.