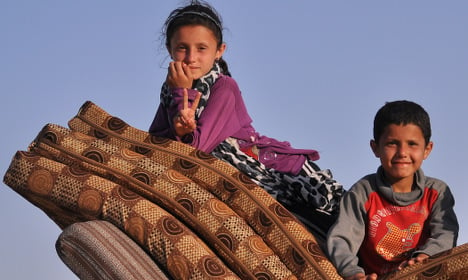 Displaced Syrian children, who fled their homes in the northeast city of Hasakeh due to attacks by the Islamic State group. Photo: AFP

The strikes were announced on the eve of the UN General Assembly in New York where Syria is back in the diplomatic limelight after four years of grinding war that has sent tens of thousands of refugees fleeing to Europe.

France, which has been the target of a series of jihadist attacks, has explained its change in strategy by saying it was acting in self-defence.

However analysts say that by sending fighter jets to Syria, France is mainly seeking to ease domestic political pressure, and remain relevant abroad in the latest scramble for a diplomatic solution to the conflict.

“To say that we will prevent terrorist attacks in France thanks to air strikes in Syria is, and I am weighing my words, absolute bullshit,” said Eric Denece, the director of the French intelligence think-tank CF2R.

“When the Americans carry out thousands of strikes … it can have a limited impact. But for France in Syria, it will only be a few symbolic strikes. It is gesticulation, smoke and mirrors to deceive the public.”

France has been part of the US-led coalition bombarding IS in Iraq since September 2014, and has carried out 215 out of nearly 4,500 strikes there, according to French and US figures.

However until now it refused to join the US, Canada, Turkey and Gulf states in Syria, where the coalition has conducted some 2,500 strikes.

But the latest attempted jihadist attack — by a gunman on a Paris-bound high-speed train in August — ramped up political pressure on Paris which ordered surveillance flights two weeks ago.

France has been on high alert since Islamic extremists gunned down 17 people, including cartoonists at the satirical magazine Charlie Hebdo, in a three-day killing spree in Paris in January.

“What we want is to know what is being prepared against us and what is being done against the Syrian population,” President Francois Hollande said when he announced France's intention to carry out strikes.

However he ruled out sending French ground forces into Syria, saying it would be “unrealistic.”

Denece said as the efforts were not accompanied by any ground troops, bombing from the air had limited impact.

“We can already see it in Iraq, where the majority of American planes return to base without having dropped their bombs. And we have just learned the result of these operations were manipulated to make us think they were working.”

Francois Burgat of the Institute for Research into the Arab and Muslim world in Aix-en-Provence agreed that the French air strikes “have in fact very little chance of significantly affecting the military balance.”

But the “symbolic and political impact could be considered more important,” he told AFP.

Faced with a highly mobile enemy dispersed among the population, the chances of destroying a training camp, command post or house where jihadists are sitting cooking up plans to attack France, are next to nothing, said a former high-placed official in French intelligence, speaking on condition of anonymity.

He said such camps no longer existed.

“Even if they have logistical or operational gatherings it is always fleeting. They know they are being observed continuously and they have adapted. They move all the time.

“What we (France) want is to show that we are present in Syria, that we must be included in the political solution that is being drawn up. In the same way the Russians are showing it by reinforcing their military presence” in Syria.

France's air strikes against what Prime Minister Manuel Valls called IS “sanctuaries” comes after a series of humiliating blows for the military campaign against the jihadist group.

In a shock admission on Friday, the Pentagon said a group of US-trained rebels had handed over ammunition and equipment to Al-Qaeda's Syria affiliate, the Al-Nusra Front, purportedly in exchange for safe passage.

The US has also battled rumours of defections of Syrian rebels it has trained to fight against IS as well as accusations it manipulated intelligence about the effectiveness of its operations against the jihadists.