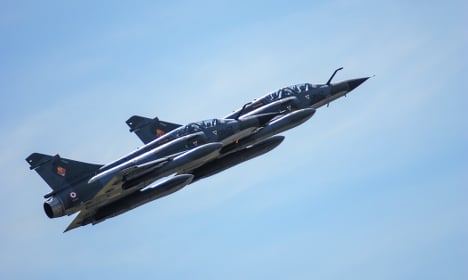 The office of President Francois Hollande said the strikes “to fight the terrorist threat” of the Isis group were aimed at targets identified by more than two weeks of surveillance flights.

The operation was done “autonomously” of a US-led coalition which has been bombarding the jihadists, but was coordinated with regional partners, a statement said.

“We will strike any time our national security is at stake,” it said.

No details were given of the nature or location of the strikes.

Prime Minister Manuel Valls told journalists that France was acting in “self-defence” and had targeted Isis “sanctuaries where those who attack France are trained”.

“We are attacking Daesh (another word for Isis) in Syria because this terrorist organisation is preparing attacks on France from these sanctuaries,” he said.

Until now, France has limited its air strikes on the extremist group to Iraqi territory, but in an announcement earlier this month, it cited self-defence as its rationale for expanding its policy to Syria.

Hollande has been under political pressure to take action against Isis after a series of jihadist attacks in France.

In January, Islamist extremists killed 17 people in three days of shootings in Paris and in August a gunman tried to attack a high-speed train but was thwarted by passengers.

The United States and its coalition partners including Saudi Arabia, Jordan, Bahrain and the UAE have carried out more than 2,500 air strikes in Syria, according to US figures.

The announcement that France has started its own strikes comes the day before Hollande joins leaders for the start of the UN General Assembly in New York, where the four-year Syrian war is expected to be at the centre of debate.

The French presidency's statement on Sunday called for a “comprehensive response (to the) Syrian chaos”, saying: “Civilian populations must be protected against all forms of violence, that of Daesh and other terrorist groups, but also against the murderous bombings of (Syrian President) Bashar al-Assad.”

Iran and Russia have given strong backing to Assad, whom the United States and European countries including France see as the instigator of a civil war that has left up to 250,000 dead and large parts of his country in the hands of Isis militants.

However, there appears to have been a shift in recent days with several countries changing their stance on Assad.

Turkish President Recep Tayyip Erdogan, a fierce critic of Assad, suggested for the first time on Thursday that the Syrian president could have a role to play in a future political transition.

And in a sign the European position on Assad may also be softening, German Chancellor Angela Merkel suggested Assad could be part of discussions to end the bloodshed, although German officials played down her comments.

Russia meanwhile has rankled the West by strengthening its military presence in Syria in recent weeks.

Ahead of the UN gathering, US Secretary of State John Kerry met Iranian counterpart Mohammad Javad Zarif on Saturday to discuss Syria.

Washington refuses to accept a peace process that would leave Assad in power and so has backed and armed small “moderate” rebel groups.

But that strategy appeared in tatters after the Pentagon admitted the latest US-trained fighters to cross into Syria had given a quarter of their equipment to Al-Qaeda.