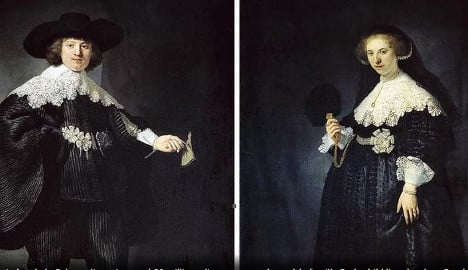 France said on Thursday it was willing to pay €80 million ($90 million) to acquire one of two Rembrandt paintings on sale by the Rothschild family for the Louvre museum.

The two full-length portraits of a young couple painted shortly before their wedding in 1634 have been owned by the wealthy Rothschild banking family since the mid-19th century and have rarely been seen in public.

Culture Minister Fleur Pellerin said the offer had been submitted and would be “exceptionally financed by the Bank of France”.

Pellerin and her Dutch counterpart Jet Bussemaker wrote to the Rothschilds in July proposing that the Louvre and Rijksmuseum in Amsterdam each buy one of the paintings.

On Monday, the Netherlands said it was hoping to buy both artworks, with the government footing half the 160 million euro bill, while the Rijksmuseum would raise the rest.

However, the joint acquisition seemed back on the table in what Pellerin described as “an innovative solution that would strengthen the cultural cooperation between France and the Netherlands.”

She said the two artworks would alternate between the museums.

The portraits of Maerten Soolmans and Oopjen Coppit are believed to be in the collection of Eric de Rothschild.

The artnet website said they have only been publicly viewed once in the past 150 years.

“It is of utmost importance to us that the paintings, which are now in private hands, should come under public ownership so that they are accessible to the public and remain in Europe,” Bussemaker told Dutch radio on Monday.

“Art belongs to us all collectively,” she said, adding it “would be highly undesirable” if the paintings were sold “to some rich oil nation”.