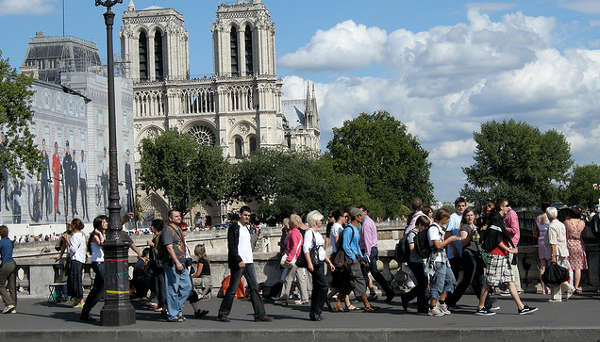 Photo: AFP
The controversial zones, which even the mayor of Paris is not in favour of, were revealed on Thursday in Le Parisien newspaper.
The twelve zones, within which shops can open on Sundays and until midnight on weekdays, are: Saint-Germain, Rennes-Saint-Sulpice, Olympiades-Italie, Saint-Emilion-Bibliotheque, Le Marais (including the Haute Marais and Ile-saint-Louis, but not including Place de la Republique) Les Halles, Saint-Honoré-Vendôme, Montmartre, Haussmann, Maillot-Ternes (with Avenue Wagram), Champs Elysées-Montaigne and Beaugrenelle, (with a part of Rue Saint Charles).

Slight changes have been to the zones, known as ZTIs in French, since they were first drawn up in August.
Similar ZTIs will be unveiled in the coming days for the tourist towns of Nice, Cannes and Deauville in Normandy.
Another law will be passed in the coming weeks which will allow shops in Paris's main train stations to open on Sundays, but not after midnight, Le Parisien reports.
While the changes may be good news for shopaholics and tourists they have not pleased everyone, not least the Paris mayor Anne Hidalgo, who has vowed to challenge them in France's highest court.
Unions and workers, who are against Sunday working hours have also planned a strike on October 15th to protest against the extension of Sunday shopping.