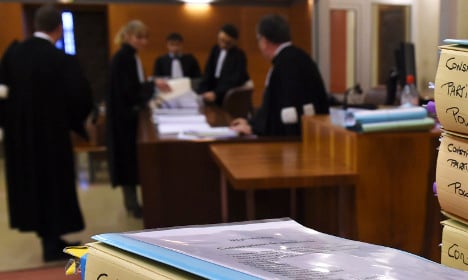 The lawyer said authorities had waged a long campaign to make him leave Twitter and other social media. File photo: AFP

The lawyer in the Saône-et-Loire department in central France was banned from tweeting last Friday.

“The twetts (sic), blogs and other childish distractions of Mr X aren’t in line with the principles of the profession: courtesy and respect,” said the bar association of Mâcon in its unusual ruling.

“The bar will call him in to inform him of the need to stop these practices immediately,” the authors of the text added.

The lawyer, who tweets using the anonymous Twitter handle Herminator71 said he was “completely shocked” by the decision.

“His tweets were neither defamatory or insulting,” he was quoted as saying by France’s 20 minutes newspaper.

He explained he tweeted about funny goings-on in court, or TV shows.

“Two years ago I was asked to tweet under a pseudonym, to change accounts, to stop my tweets and I was reprimanded for making fun of police officers because I said there were spelling mistakes in their reports,” the lawyer went on to say.

In a tweet now visible only to confirmed followers the lawyer informed people he had been banned from social media. “Democracy is dead,” he said as a final parting shot.

The legal practitioner’s blog titled souslarobe (or ‘under the robe’) can still be accessed online but the latest entry is dated September 13th.

That entry addresses French journalists’ unwillingness to address the question of whether the father of young Syrian boy Aylan Kurdiwas a people smuggler. Photographs of the boy’s dead body on a Turkish beach shocked the world when published in early September.

Other recent posts highlight the rights workers have in periods of extreme temperatures and the decision by regional health authorities not to recognize the qualifications of wha the lawyer described as a highly-trained Romanian doctor.

There were plenty of tweets in support of the lawyer on Thursday but not everyone was sorry.

“On the other, it's true: the tweets…umm..the twetts, really are childish,” wrote this Twitter user.