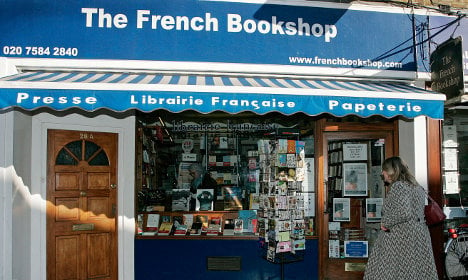 Is London really over run by "Les Frogs"? Photo: AFP

In Camden Market or the streets of South Kensington, French restaurants jostle with French bakeries and bookstores, and the French language is part of the background noise.

Whether business leaders or students, bankers or artists, bartenders or footballers, there are a lot of French people in London.

Exactly how many, though, is unclear — and it's a subject of much debate.

A total of 120,000 French citizens are registered as residents in the United Kingdom. But European Union citizens are not required to register with authorities.

The French consulate believes the figure 120,000 represents about 40 percent of the actual number, estimated to be about 300,000, two-thirds of them in Greater London.

That makes the British capital about the 50th French city, equivalent to the urban area of the coastal city of La Rochelle in western France. (A French bakery in London catering to not as many French as your lead to believe. Photo: AFP)

If so, London is far from “France's sixth biggest city”, as it was once branded by London's colourful mayor Boris Johnson.

France is nevertheless well-represented in London with its 200,000 “Londoniens”, but no more than other major European countries.

The consulates of Spain and Germany estimate there are 300,000 citizens each in London.

The Italian embassy said that 250,000 of their citizens are registered but estimates that there are probably double that in Britain, with “at least 200,000 in London”.

But all these nationalities are beaten hands-down by Poland, who have 850,000 in Britain, according to the National Statistics Office. Polish is
also the country's second most-spoken language after English.

'A sense of dismay'

Far from being Paris' “21st arrondissement,” or district, London is a world city, with more than three million of its 8.5 million residents foreign-born, according to a recent study by the University of Oxford.

If a lot of French is heard, it is also due to the impact of tourism.

Helped by their proximity to Britain, French people are, year after year, the capital's most numerous visitors, with 2,000,000 coming in 2014, more than visitors from Germany or the United States.

“And they get around a lot,” said Olivier Cadic, a senator for French nationals abroad, who has been based in Britain since 1996. Those who come to live in Britain are primarily young: 26 percent under 18 and 40 percent aged between 18 and 40.

About 25,000 are students, and others come to work in catering, marketing, business and of course finance.

They are drawn by geographical proximity, the language, a dynamic labour market and low unemployment — 5.6 percent compared to 10.4 percent in France in July.

Taxation can also help to lure companies across the channel, with a corporation tax of 20 percent in Britain compared to 33.33 percent in France, though income tax rates are broadly similar.

A rumoured influx of French people into London since 2012 is not borne out by the numbers. In fact since December last year, there have been slightly more departures than arrivals.

Cadic notes however that there has been overall a rise in arrivals since 2011.

Young French emigres like Britain for the potential it offers for boosting their career.

It has a stronger economy and more flexible approach on employment compared with France, where hiring practices are seen as stuffy and restrictive.

Even so, relatively few make Britain their permanent home.

Those who leave for Britain spend on average six years there.

Three-quarters return to France — which itself is home to over 400,000 British people.