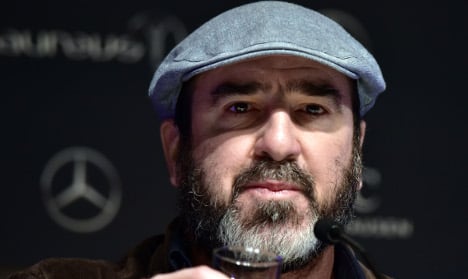 Cantona said his own family history had inspired his decision. Photo: AFP

“I'm organizing that with authorities in Marseille,” Cantona told France Inter radio, explaining he intended to provide a small house, garden and food for a period of at least two years.

“If you house someone who does not have the right to work, then they need to eat too,” said the enigmatic former France captain.

Cantona explained that his own family history had inspired his decision.

“My maternal grandparents were Spanish Republicans who fled Franco (in the Spanish civil war) by crossing the Pyrenees on foot,” he said. “That being our story, it certainly played a role.”

The man credited with sparking Manchester United's period of dominance in English football has carved out a successful second career as an actor since hanging up his boots.

He is currently performing in the stage play 'Victor' at a Parisian theatre and also stars in the movie 'Rois du Monde' (Kings of the World) directed by Laurent Laffargue, which is released in France on Wednesday.