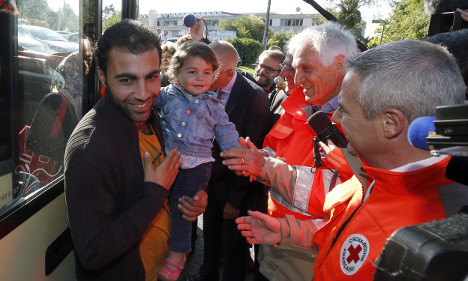 Refugees are welcomed in France earlier this month,but many choose to seek asylum elsewhere. Photo: AFP

They dream of a better life in Germany, Sweden or Holland, but one country appears glaringly absent from the lips of refugees on their arduous journey to Europe: France.

So why are refugees skirting Europe's second largest economy, once seen as the promised land for asylum-seekers?

“France is not good for my future, and on top of that it doesn't have the reputation of easily giving a residence permit,” said Edward, a 24-year-old from Baghdad waiting in Stockholm for a boat to Finland.

Word has spread that going to France means months without a roof over their heads, wading through French bureaucracy and dealing with disobliging civil servants who don't speak English.

The country's stuttering economy, where some 3.5 million are unemployed, is also a turn-off.

France “is nice to visit but not for work”, said Abdulrahman, a 26-year-old Syrian in Sweden.

Two weeks ago, President Francois Hollande offered to take up to 1,000 refugees to help Germany, which is buckling under thousands of daily arrivals.

Right away, Paris dispatched a team of immigration officials to Munich to convince refugees to seek asylum in France.

However less than 600 arrived on organised buses and no more are expected for the moment, the immigration office said, refusing further comment.

But being granted refugee status in France is only half the battle.

Sudanese Abd Al Kareem, who has spent eight months living in a park in Paris, has been granted asylum but he says the problems don't end there.

“No one here goes hungry. But that's not the problem,” he told The Local.

“I've got papers, I am going to stay in France…. but what am I going to do?  We need work, we need a place to live, we need to learn the language. How are we going to do that?”

It is an hour's drive outside Paris, through verdant thick forest and cow-dotted pastures that one group of Iraqi and Syrian refugees were welcomed in a faded-white monastery in the village of Bonnelles.

Their eyes sparkle when talking about France, a “land of human rights” with long ties to Syria — which was under French rule for about 25 years after World War I.

But few were planning to come here until they were approached by the immigration officials in Munich.

“They promised us three things: easy papers, that our families can join us, and a 10-year residency permit,” said Sabah, 38, an English teacher from a besieged, rebel-held area east of Damascus, eating a French breakfast of baguette and Nutella.

The fast-tracked process will get them residency status in 15 days compared to the average nine months, the immigration office has vowed.

Ahmad, 29 — who is grateful he left his wife and children behind because he “would have had to choose which one to save” when his rubber dinghy sank and he had to swim six hours to the Greek island of Lesbos — was initially set on going to Germany.

“We hesitated, we hesitated. We had heard France didn't want to take refugees. Other Syrians had lots of difficulties and said my family's papers would take a long time.

“We decided to come here,” he said, laughing as he explained that if things don't go smoothly in France, he will “flee back to Germany”.

Family ties are key in deciding where to go.

Saleh al-Moussa, 17, wants to go back to Germany where his brother is registered as an asylum seeker. They fled a few months apart, to avoid forced conscription by the Islamic State group in Deir Ezzor province in Syria.

“I don't have any relatives here,” he said.

However the refugees are deeply grateful to France for taking them in and most are determined to make their new lives work.

Since the war broke out in 2011, only 7,000 Syrians have been granted refugee status in France, out of four million people who have fled the country.

Paris has promised to take another 31,000 refugees over the next two years and is working to speed up the asylum-seeking process and increase available housing.

Sabreen Al-Rassace of the organisation Revivre, which has been helping Syrian refugees since the conflict began, is not surprised that France is not top of the list for refugees.

She cites the “very, very difficult” process of getting a house and the “long and very traumatising administrative process”.

One baffling rule requires that to start the asylum process, you need an address. But you can't get an address until you are in the system.

If you are that lucky.

France has only 30,000 beds available for over 60,000 asylum-seekers, meaning many are forced to live with friends or family, or on the street.

“So Syrians exchange their experiences through Facebook, through Whatsapp and for them France is not a good land to welcome refugees,” said Al-Rassace.

Then there is the language issue.

Most refugees only have a smattering of English, “and there is no effort at all from (administrative) employees”, she said, adding that many official forms were only available in French.

She believes the main problem is a “lack of coordination and the lack of political will”.

François Gemene, a specialist in migration with Science Po’s Centre of International Research, said France should be deeply concerned that more refugees do not want to come.

“The fact the refugees don’t want to come to France is a clear sign that the country is no longer attractive,” he told The Local. “They know they will get better opportunities in Germany, Sweden and the UK.”

“The fact it is no longer considered a place to seek sanctuary shows without doubt the economic situation in the country is no longer in good health and neither is the democratic situation.”

He believes France should do more to welcome refugees.

“France has to decide if it wants to project itself it the future in a globalised world or if it wants to be isolated, put up borders and become a museum.”