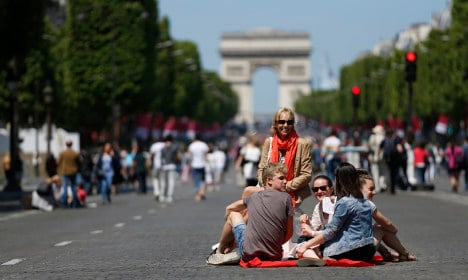 While Sunday's event has been hyped as a 'car-free' day, only a small part of the city will be fully car-free. File photo: AFP

The initiative named “Journée Sans Voitues” was first touted by the city’s mayor Anne Hidalgo back in March and will see a small, but heavily-touristed section of the city centre become a “pedestrian and cyclists paradise” from 11am to 7pm on Sunday 27th.

The main car-free zone will be in the 1st, 2nd, 3rd and 4th arrondissements surrounding the Marais, plus the famous Champs-Elysées avenue and the tourist area of Montmartre.

But pedestrians will still have to be on the look out for cars.

While several roads will be entirely pedestrianized for the day, the car-free zones (see in the map below in dark green) won't be entirely free of cars, with public transport, delivery vehicles, taxis and emergency services still able to use the streets.

And those people who live in the centre will also be allowed to use their cars if they wish.

Large swathes of the French capital, meanwhile, will see access for authorized vehicles only with the speed limit capped at 20km/h and authorities are essentially telling people to leave their cars at home.

For more details of the areas affected see this map below (click on the map to make it bigger):

Mayor Hidalgo had been hoping to extend the “Journée sans Voitures” to a larger area of the capital, but blamed the government for limiting the zones.

“I regret the fact we have only been  authorized by the state to put this ban on a limited area in the center of the capital,” she said.

“I would, of course, have preferred a more ambitious event to respect the democratic will of the Parisians to go faster and further in the fight against pollution (…)

“With the new police chief, Michel Cadot, we are already working on the 2016 edition, which I hope will be more ambitious. “

The car-free initiative, which will also see free live events across the city, comes several months after Paris briefly became the most polluted city in the world in March.

According to the company Plume Labs, the level of the concentration of potentially dangerous particulates in the air particles rose so high, that Paris became the most polluted city in the world for a few hours, topping the likes of the notoriously smoggy Shanghai.

That result came a year after a spike in the city’s pollution levels saw the city make its public transport and bike share programmes free for the day.

“The most recent data indicate that in 2010, 223,000 deaths from lung cancer worldwide resulted from air pollution,” it said in an October report.

SEE ALSO: The ten Paris Streets you just have to walk down