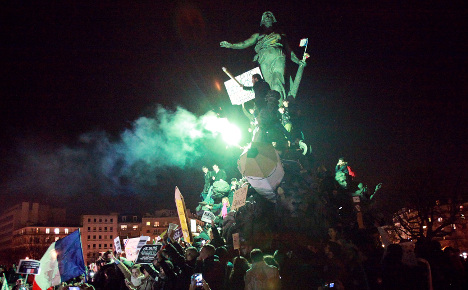 Protesters climb the Marianne statue during the mass rally in the aftermath of the Paris terror attacks. Photo: AFP

The symbolic statue of Marianne in the Place de la Republique was the focal point for the nightly “liberté and solidarité” demonstrations in the aftermath of January's Paris terror attacks.

The spontaneous gatherings culminated in the mass rally on Sunday January 11th when millions of Parisians poured through the square.

Images of protesters waving flags, banners and symbolic pencils from various points atop the 25-metre high Marianne statue were beamed around the world and plastered the front pages of scores of newspapers.

But we may have seen the last of those scenes after the tragic death of a 21-year-old reveller during Saturday’s techno parade. The man had been climbing up to the top of the statue when he reportedly slipped and fell. His mother described it as “a murder” on Monday, and called for those who had encouraged the victim to scale the statue to be punished.

“It's a murder because my son wanted to stop and they jeered him to push him to continue,” she told BFM TV. “The people shouted 'you're a coward'.

“We don't push a child to commit suicide. It's not even suicide, it's murder.”

Since the incident questions are being asked about whether the monument should be closed off to the public. “We need to react after this incident,” Pierre Aidenbaum told Le Parisien.

The mayor is concerned that the Marianne statue is magnet for those who can’t resist the urge to scale the monument during regular protests hosted at Place de la République.

“Every time I see a climber I am worried,” he said.

“I often say to myself: I just hope there’s not an accident one day. To die at 20 years of age like that is so needless.”

But Saturday’s incident has confirmed his view that the statue must be closed off in some way.

“We need to secure the statue to prevent anyone from climbing to the top.”

François Vauglin mayor of the 11th has called for a study to be carried out to see how the Marianne statue and the monuments in Place de la Bastille and Place de la Nation can be secured “without damaging their character”. (The July Column in Place de la Bastille that also attracts climbers may also be closed off. AFP)