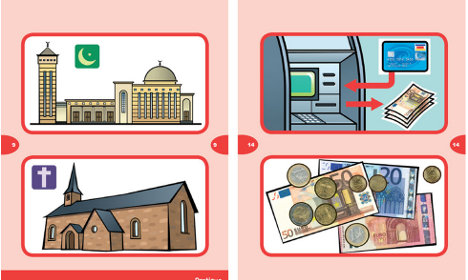 Generations of French travellers have used the famous ‘Guides de Routard’ – think the French version of the Lonely Planet – to choose a restaurant, find a hotel or select that special place for a romantic getaway.

But now the French publishing company has produced a completely different type of guide: one to help refugees and asylum seekers navigate the complexities of their new life in France.

The 85-page guide, titled Hello!, is made up of pictures only, allowing new arrivals to simply point and show people what they need in situations ranging from hospital visits to hotel reception areas.

Other sections cover religion and food, as well as on everything from banking to phone batteries.

The guide is the brainchild of Philippe Gloaguen, founder of Routard who was moved by his disgust for what he believes is a lack of action on the part of the French government in the current refugee crisis.

“Our government is a pack of cowards,” Gloaguen told French weekly newspaper Le Journal de Dimanche, noting that while France had taken in 100,000 White Russians after that country's civil war, it has committed to taking in just 24,000 Syrian refugees.

“We are not talking about refugees but people who are going to die,” Gloaguen added.

Some 4,000 copies of the new guide will be distributed to FNARS, an organization representing refugee assistance centres across France. Copies will then go to people who need them.

France recently agreed to take in 24,000 Syrian refugees over the next two years, after a request from an EU which is struggling to deal with the current refugee crisis.

Refugees have spoken of their reluctance to come to France due to tales of the notoriously hard to navigate bureaucracy in the country and the lack of help on offer.

At the time, French President François Hollande said it was a “fundamental principle” of France to accept asylum seekers but many say there is a lack of political will to ensure refugees feel welcome and indeed want to stay.

But Hollande’s announcement has been greeted with hostility by some sections of the population in a country still reeling in the wake of terror attacks in Jannuary in Paris on the offices of satirical magazine Charlie Hebdo.

“These refugees come from Islamic country at war, a fact which weighs on public opinion in France,” Jerôme Fourquet, a political analyst and pollster from Ifop told The Local recently.

Some French mayors have also made headlines by saying they would accept Christian refugees only, statements which have been slammed by the French government.