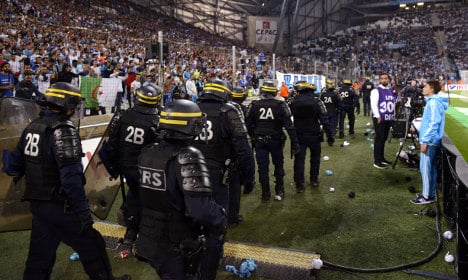 Riot police intervene after fans throw missiles on to the pitch. Photo: AFP

Lyon president Jean-Michel Aulas insisted early Monday that the toxic Ligue 1 clash between his side and Marseille should not have been restarted after a 20-minute stoppage caused by missile-throwing fans.

With just over an hour gone at Marseille's Stade Velodrome ground, officials instructed both teams to return to the dressing rooms as objects, including bottles and cups, rained down from the stands as Lyon goalkeeper Anthony Lopes was trying to take a goal-kick.

The return of Lyon's Mathieu Valbuena to face his former club had already made for a charged atmosphere with the France international, roundly booed throughout, already the target of missiles when taking corners.

Lyon were leading 1-0 through a first-half penalty from Alexandre Lacazette when play was interrupted. But on the resumption, Marseille equalised to rescue a point.

“It was a very disagreeable atmosphere. I have been in football for 28 years but never have I seen the things like tonight. What happened to Valbuena was a vendetta, his physical safety was put in danger.”

Marseille president Vincent Labrune tried to play down the trouble.

“The club will take its responsibility for the two or three bottles of beer that were thrown on the pitch. But we all have to be sensible. Me, I will accept my responsibilities as president and I want others to do the same — from the federation, the referees' body and Lyon,” he said.

Lacazette, scorer of a club-record 27 goals last season on his way to winning Ligue 1's Player of the Year award, converted a contentious first-half penalty to atone for his midweek miss in the Champions League.

But Marseille, despite seeing Romain Alessandrini sent off just before half-time, rescued a point after the interruption courtesy of Karim Rekik's first goal in French football.

Valbuena was returning to the Stade Velodrome where he starred for Marseille until leaving for Dynamo Moscow last year before signing with Lyon in August.

The Lyon playmaker brushed off the jeers and missiles from the crowd as well as a series of heavy challenges and played a key role in the visitors taking a 25th-minute lead.

Valbuena threaded a pass through to Lacazette who then went down following minimal contact with Marseille goalkeeper Steve Mandanda before calmly tucking away the resulting spot-kick.

Lacazette had seen his late penalty saved in Wednesday's 1-1 draw against nine-man Gent in Belgium but held his nerve on Sunday to end his early-season drought.

Lacazette should have added to his tally a few minutes later when he timed a run in behind the Marseille defence to perfection only for his shot to crash back off the upright with Mandanda well beaten.

Marseille were reduced to 10 men just before half-time with Alessandrini dismissed for a crude challenge on Valbuena.

Earlier, Saint-Etienne recorded a fourth successive league win, 2-0 against Nantes, to move to within a point of leaders Paris Saint-Germain.

Les Verts took a first-half lead at the Stade Geoffroy-Guichard through a first Ligue 1 goal from teenager Jonathan Bamba.

Slovenian international Robert Beric, who arrived from Rapid Vienna last month, then added the second just after half-time to seal victory for Christophe Galtier's side.

Monaco's indifferent start to the season continued as the principality side found themselves two goals down to Lorient inside 20 minutes.

Didier Ndong hammered a long-range thunderbolt beyond Monaco goalkeeper Danijel Subasic before Benjamin Jeannot added a second for the visitors.

Almamy Toure pulled one back for Monaco shortly after and the hosts were back on level terms when Thomas Lemar equalised just after the interval but substitute Benjamin Moukandjo's 59th-minute strike won it for Lorient.

On Saturday, Edinson Cavani kept Paris Saint-Germain's unbeaten start to the season intact as he equalised late on at Reims in a 1-1 draw.