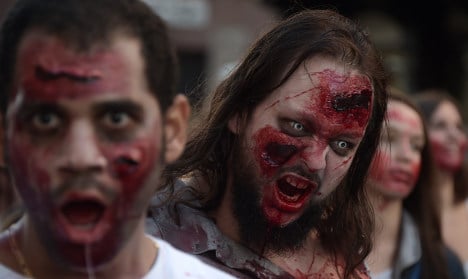 But are these zombies really more frightening than Strasbourg's army of Eurocrats? Photo: AFP

Around 5,000 participants bearing artistically hideous facial wounds took part in the zombie walk, timed to coincide with Strasbourg’s European Fantastic Film Festival, which features everything from sci-fi to horror movies.

“It’s cool to be dead because you can do what you want, you can live your life,” 12-year-old ‘zombie’ Eléonore told BFM TV, her comment echoing the general good humour surrounding the horrific event. Even rain during the concert that followed the walk couldn’t dampen people’s spirits: “It doesn’t matter because zombies are dripping anyway, event organizer Daniel Cohen said.

Zombie walks have become increasingly popular in recent years on the back of the success of television shows like The Walking Dead and the Twilight movie series. But not everyone is in on the joke.

In October 2014, the city of Lille banned a zombie walk in Lille after authorities deemed “the spectacle could cause problems for the very young”.

Zombies in their modern form first appeared in the 1968 film Night of the Living Dead.

One critic recently suggested their current popularity may be based on our secret fear that we are all, in fact, “a heedless plague of humanity consuming the world”.