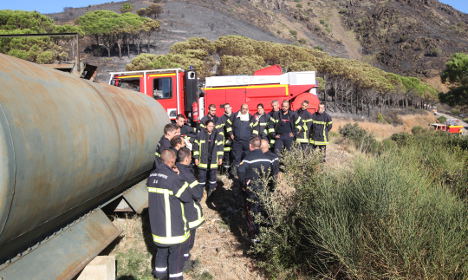 The firefighter died after the fire in the region of Cerbère near the Spanish border rapidly changed direction overnight. Photo: AFP

Patricia Filippi died after the front of the “extremely fierce” fire in the region of Cerbère near the Spanish border rapidly changed direction overnight, local authorities said.

France's Interior Minister Bernard Cazeneuve on Friday paid homage to Filippi — a volunteer firefighter for five years — before announcing he would visit the fire-affected zone later in the day.

The fire “can’t have been anything but intentional,” local mayor Jean-Claude Portella said, explaining its ignition point had been “traced back to the side of a road”.

Around 200 firefighters were mobilized to tackle the blaze on Thursday evening, with a further 50 expected to be called in on Friday morning.

By 6am on Friday, the fire had burned its way through 150 hectares of forest, and was still not under control at 7am, Le Parisien newspaper reports.

“This fire is criminal. Human stupidity has claimed the life of a mother,” said Jean-Michel Solé, the mayor of nearby Banyuls-sur-Mer.

There are currently 190,000 voluntary firefighters in France, with President Hollande hoping to increase this number to 200,000.

The woodland fire near Cerbère comes after a week of wild weather in France which saw serious flooding across the south and even a tornado in western France.