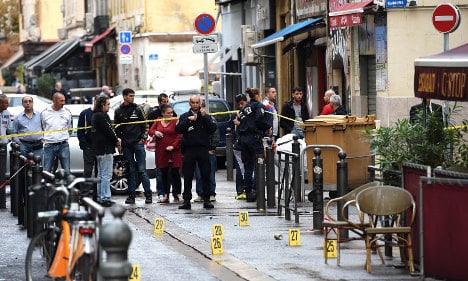 Police at the scene of a fatal shooting in Marseille from the weekend. Photo: AFP
Marseille is probably more often associated with “drugs”, “kalashnikovs”, and “murder” than “tranquil squares, stepped streets and bustling 19th century avenues”.
A quick glance through the French press in recent days, weeks and even years and it's not surprising why.
For example, Saturday night saw mystery gunmen open fire in the city centre, killing one security guard and injuring five.
The shooting prompted the Interior Minister Bernard Cazeneuve to call for a nationwide crackdown on weapons in the coming weeks, saying: “There is always too much violence in this city”. (Police inspect the crime scene in Marseille. Photo: AFP)
Police figures from 2012 revealed that a third of all murders in France that year were in the Marseille region.
The city is also a hub for drug trafficking, aided by the fact that the port city has links to North Africa and Morocco – the source of most of the hashish that comes into Europe. Add to that the fact that there are poorer suburbs with young people involved in crime, then you have a recipe for drug-dealing success.
But it's not just small scale.
Wednesday saw the beginning of a trial for a Marseille drug ring of 28 people who were caught in possession of €1.34 million, 100 kilos of cannabis, ten weapons, and accounts detailing a daily turnover of nearly €50,000.
Yet despite all this, tourist figures are strong.
The graph below shows that the city has continued to grow since 2009 in terms of tourist activity, even maintaining the boom from when it was the European Capital of Culture back in 2013. Last year alone Marseille dragged in €2.7 million in visitor taxes – known in France as taxe de séjour – up from €2.6 million the previous year and €2.1 in 2012.
Maxime Tissot, the head of the city’s tourist board, was clearly frustrated to have to answer questions about the dark side of Marseille, insisting that life in the port city was better than ever.
“I don't know why so many people want to talk about safety and security in a city like Marseille when there are so many beautiful things to see here, so many things to do,” he told The Local.
“It's a big city, and of course there's crime, but there's also crime in London, New York, Paris. This is nothing new.”
Tissot refused to speak further on any questions of crime, preferring instead to highlight why a visitor should choose to visit the southern port. (The Notre-Dame de la Garde Cathedral in Marseille. Photo: Selden Vestrit/Flickr)
“Marseille was ranked as one of the best cities in the world over the last two years,” he said, adding that new museums and other developments were both major draw cards.
“A lot has changed here, and I think if we're talking about tourism then Marseille has changed its image completely. This is the oldest city in France, even in Europe, but it's been renewed,” he said.
“And don't forget the sun and the sea, both very important for a good holiday.”
And the tourists continue to come in droves, with the latest stats from the Marseille tourism board showing a rise in tourist-related employment and the number of tourism-related businesses.
The tourists themselves are mostly from abroad (56.3 percent compared to 43.7 percent from France), with the board noting that the foreigners were most likely to come from Spain, Germany, Italy, the UK, and the US.
It added that Marseille has seen an increase in US visitors, largely thanks to cruise ships, and it noted an increase in tourists from Portugal and Latin America.
READ ALSO: Marseille: 'A city with a unique soul' (The port city of Marseille. Photo: AFP)
Tourists who've visited have left largely positive reviews about the city on travel website TripAdvisor, although one recent survey ranked the Marseille locals as the fourth least friendly people in the world.
Marc Mullen, a Londoner who visited with his wife and three daughters in August, said that tales of crime “didn't put him off at all”.
“We didn't have a car so used public transport – buses,trams,metros – day and night,” he told The Local. “Having travelled to more 'exotic' places than Marseille I'm always on my toes anyway, especially when I first get somewhere,” he told The Local.
“But at no point did we feel unsafe. I found the whole place relaxing to travel about.”
Local resident Jean-Luc Bardy, who opened O'Brady's, the first pub in the city back in 1996, dismissed any talk of murderous Marseille as “bullshit”.
“Everything you hear in the media about Marseille sounds like they're talking about another city,” he tells The Local, suggesting most of the trouble is in the northern suburbs.
“I never recognize my own city when I see it on TV. I've lived here for 50 years and have never seen anything.”
He said that the city has transformed over the past 20 years from a port city to a tourist city, but that the French media has gotten stuck in the past when Marseille had a more troubled history.
“There are shootings in Paris everyday, but the media never reports them. Anything that happens here gets magnified ten times over because it happened in Marseille.”
He said that the reports have left Marseille with a tarnished reputation, adding that when he travels and tells people his hometown, they either bring up violence or football.
“But the tourists who come here love it. They can't believe how beautiful it is, how nice the people are… they just say wow. I don't know why people talk so much bullshit about this city. What can we do?”