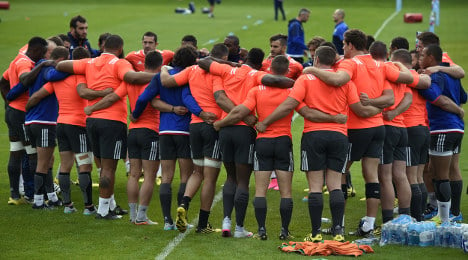 French rugby team seen dicussing whether Croydon is chic or not. Photo: AFP

Who would have thought that France’s preparations for the Rugby World Cup would have been dominated by a noisy wedding, a row over whether the London suburb of Croydon is “chic”, and a parking ticket.

“Moaning French” was the predictable headline in the Daily Mail after reports emerged this week that the French team were not quite happy with the facilities at their camp in the London suburb of Croydon.

Apparently one of the French players had had the temerity to complain about being kept up all night by a raucous wedding at the Selsdon Park Hotel, where they are staying.

Then a French rugby journalist went and had the cheek to describe the southern London suburb as “pas tres chic”. Let’s face it, that’s hardly the worst thing that’s been said or written about Croydon over the years.

The Daily Mail itself referred to the town as “lifeless” in another article this week. Nevertheless the knives were out and the Mail even sent a reporter to Croydon in an attempt to take apart the French press’s “sniffy articles” about the place, but instead just seemed to confirm the French journalist might have had a point.

Then came the moment of revenge for the London borough when a parking warden was photographed handing out a ticket to the French team coach because it was parked in a bus stop.

And so did the local musician who captured the photo, who was apparently so upset at his town being described as “pas tres chic” by the French press that he has vowed “never to eat in a French restaurant.”

Meanwhile Croydon Council has been forced to deny that the parking ticket was handed out as an act of revenge.

A spokesman for Croydon Council said: “Despite appearances, this is not Croydon’s revenge for disparaging remarks allegedly made about the town by a French rugby journalist earlier this week.

“The fact of the matter is that the coach was parked illegally in a bus stop on a busy main road.”

For their part the French rugby team insists they are “enjoying Croydon”.

“Everything is fine, we are enjoying the place,” said spokesman Lionel Rossigneux.

All in all the build up to the tournament has become a bit of farce.

But it’s safe to say there won’t be many cheering the French on when they kick off their tournament against Italy on Saturday.