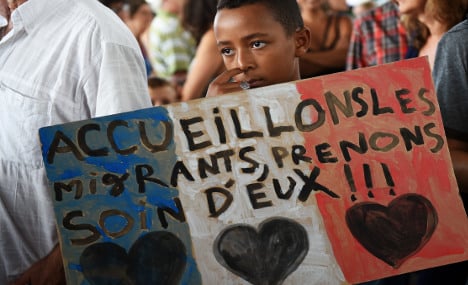 France and other European nations overwhelmed by the biggest refugee crisis since World War II may end up boosting their economies if they just let the migrants in, analysts say.

More than 430,000 people have crossed the Mediterranean to Europe so far this year, but only a few thousand of them are heading to France, with most it seems preferring to go to Germany, Sweden or the UK.

However France has said it will take in 24,000 refugees over the coming two years on top of the 6,000 or so who are thought to be currently in the country.

While many in France, both politicians and public, fret about the idea of so many new arrivals and the immediate strain it will put on the state, experts on immigration are quick to point to the economic benefits to the country.

Welcoming refugees offers Europe the chance “not only to honour its position as a democratic Union that is wealthy and respectful of tradition, but also to expand its growth prospects,” Patrick Artus, economist at French investment bank Natixis, said in a recent report.

Representatives from OPFRA, the French organisation tasked with processing asylum claims, are currently in the German city of Munich trying to persuade some of the tens of thousands of refugees who have arrived there, to choose France instead. (A caricature of the French president during a pro-refugee protest in Brussels. Photo: AFP)

François Gemene, a specialist in migration with Science Po’s Centre of International Research, said France should be deeply concerned that more refugees do not want to come.

“The fact the refugees don’t want to come to France is a clear sign that the country is no longer attractive,” he told The Local. “They know they will get better opportunities in Germany, Sweden and the UK.”

“The fact it is no longer considered a place to seek sanctuary shows without doubt the economic situation in the country is no longer in good health and neither is the democratic situation.”

He believes France should do more to welcome refugees.

“France has to decide if it wants to project itself it the future in a globalised world or if it wants to be isolated, put up borders and become a museum.”

Holger Schmieding, economist at the German investment bank Berenberg, estimated that the arrival of refugees could boost economic output in the eurozone by 0.2 percent as of the second half of 2015.

Migrants play an important role in economic expansion and in periods of decline, said historian Nancy Green, researcher at the School for Advanced Studies in the Social Sciences in Paris.

New arrivals often work in sectors where conditions are viewed as unsatisfactory for native-born workers, she said, citing the clothing and steel industries of the 19th and 20th centuries and the services industries of today.

“Our continent could and should become a great land for immigration in the 21st century,” influential French economist Thomas Piketty wrote in a recent column in the French daily Liberation. The costs to national budgets are minimal, too, according to a report issued last year by the club of advanced economies, the Organisation for Economic Cooperation and Development (OECD).

Jean-Christophe Dumont, specialist in immigration at the OECD told The Local that “no study has ever shown that immigration is bad for France.”

Dumont said France was a big enough country and had enough experience to handle the numbers of refugees Paris has agreed to take in.

However the analyst says refugees must be given time to adapt to a country before they can be expected to start contributing financially.

“They have gone through a traumatic situation, they need time to recover. We cannot expect them to start answering job advertisements when they get off the bus,” the analyst said.

Refugees arriving in Europe would need five or six years to match the employment level of migrants who enter to join families already resident in their host nations, and 15 years to match that of the native-born workforce, he said.

Refugees, like other migrants, do not aim to be dependent on welfare, Dumont added. “They want to rebuild, to have a better life for their children, to work,” he said.