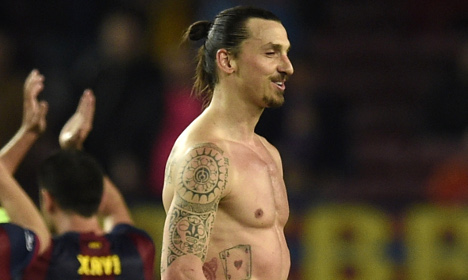 Any excuse to get his shirt off. Zlatan faces old club Malmo tonight. Photo: AFP

The French champions and the Swedish title-holders meet at the Parc des Princes in the opening round of games in Group A, and with Real Madrid and Shakhtar Donetsk also in the section, neither team can afford a slip-up.

It will be a particularly special occasion for Ibrahimovic, who grew up in the southern Swedish city and scored 16 goals in 40 league appearances for Malmö before moving to Ajax in 2001, later enjoying illustrious spells with Juventus, Inter Milan, AC Milan and Barcelona.

After Malmö beat Celtic 4-3 on aggregate to qualify for the group stage, Ibrahimovic, now 33, wrote on Twitter: “One day I hope to experience the Champions League in Malmö on the pitch. Congratulations!”

The return match in Sweden is not until November, but in the meantime Ibrahimovic will be eager to help his current side get off to a winning start in Europe, and get among the goals – he is presently just three shy of Pauleta's club record tally of 109.

The striker missed Friday's 2-2 draw at home to Bordeaux in Ligue 1 due to an abdominal injury suffered on international duty last week, but Paris coach Laurent Blanc stressed that Ibrahimovic wanted to save himself for Malmö.

In his absence, Paris dropped points for the first time in Ligue 1 this season, two catastrophic errors from German goalkeeper Kevin Trapp gifting Bordeaux goals in reply to Edinson Cavani's brace for PSG.

“We need to move on, although we also need to analyse the reasons why we drew. It's a different competition, a different opponent, but we will need to be much more rigorous and disciplined against Malmö,” warned Blanc.

Malmö finished bottom of their Champions League group last season, losing five out of six games, and they head to France on the back of a 1-1 draw at home to Elfsborg that left them fifth in the Swedish top flight.

With only seven games of the season remaining, a third consecutive title looks to be beyond them.

However, Norwegian coach Åge Hareide will be hoping Malmö, beaten European Cup finalists in 1979, can reproduce the performances that took them through three rounds of qualifying to reach the group stage.

“They are huge favourites and have world class players in every position, but we showed against Salzburg and Celtic that we have the level,” Swedish international defender Anton Tinnerholm told regional newspaper Sydsvenskan.

Malmö, whose star man is former Ajax and Werder Bremen striker Markus Rosenberg, are without Agon Mehmeti due to a foot injury.