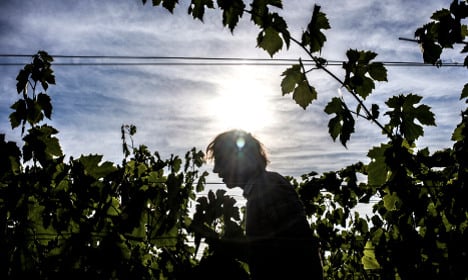 Amid the bustle of a busy harvest in France's famed Beaujolais wine-making region, a quiet effort is underway to counter one of the industry's biggest potential threats: climate change.

As seasonal pickers set up their tents and tractors cart away bulging crates of grapes, scientists scrutinize a plot of land set aside to cultivate experimental varieties of the fruit.

Their aim is to see which types fared best during what has been an exceptionally dry year in France, which is expected to cut grape output by a quarter in this region known worldwide for its light-bodied wines like Brouilly, Morgon and Julienas.

“The ones with yellow leaves, which are missing foliage at the base of the vine's main stem, the ones with withered grapes, we don't want them,” said Jean-Michel Desperrier of the Beaujolais winemakers' research centre Sicarex.

He oversaw a team of experts carefully picking, weighing and sorting small bunches of grapes that could hold a key to helping protect France's multi-billion dollar wine industry in years to come.

Since the 2003 heatwave — Europe's hottest summer since reliable records began — winemakers have become acutely aware of climate change and its impacts on their work.

The summer of 2015 has been one more reminder, with France seeing its third-hottest July since 1900 and getting less than half the usual amount of rain. France's mid-summer heatwave led to grapes in Beaujolais ripening more quickly and thus the harvest, which kicked off on August 24, started a full month earlier than two years ago.

For the moment, “warming has had positive effects on northern wineries like ours. It creates a prettier grape that is more mature” because it is less exposed to humidity-related diseases like mildew, said Bertrand Chatelet, director of Sicarex

In the future, violent periods of extreme dryness or drenching rain storms are expected to become more common and potentially more harmful.

Heat will mean more sugar in the grapes and thus a higher alcohol concentration, which is something winemakers would have to find a way to manage.

To deal with the differences imposed by climate change, several research programmes have already been launched around Europe.

France's national agriculture research institute has undertaken an effort called LACCAVE, which is studying the issue and exploring ways to adapt.

Adaptation efforts in Beaujolais are focused on the region's main grape, the purple-coloured Gamay variety. So winemakers are on the lookout for a Gamay that can stand up the alternating periods of dryness and downpour while still producing enough perfectly sweet grapes.

The right type will have large grapes with thick skin and loose bunches that allow for air-drying, which guards against rot.

Thick-skinned grapes also produce more tannin, which can help imbue the wines with a beautiful colour.

“Everything we are looking for,” said Desperrier. Researchers have been hunting far and wide, but have not yet found a perfect match.

One of the most promising leads comes from Pully, an area in western Switzerland that backs up to Lake Geneva. It is a mix of Gamaret, which is descended from a German grape called Reichensteiner, and a Gamay.

A hybrid could work for Beaujolais because, as a blended wine, it can get away with adding a new sub-variety to the mix.

“But ask a Burgundy winemaker, who works only with Pinot Noir, to change varieties and it won't be so simple,” said Herve Quenol, director of research at France's National Centre for Scientific Research (CNRS).

“It's not whether there will still be vineyards in France in 2050. The real concern is knowing if we will be able to make wine with the same characteristics and avoid changing variety and the location of vineyards,” said the climate change specialist.

Earth's changing climate is already threatening winemaking in North Africa and parts of Argentine that are totally dependent on irrigation, he added.

As the day's picking wrapped up in Beaujolais, the researchers made their way back to Chateau de l'Eclair in Liergues to send the grapes for a battery of tests on things like sugar concentration and acidity at a nearby facility.

However, most of the bunches are to be turned into wine, each variety in separate bottles, so that the researchers can compare which may adapt best to climate change and, of course, those that will make the tastiest vintage.