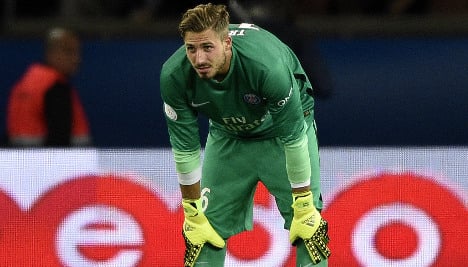 Kevin Trapp looks distraught after being at fault for two goals. Photo: AFP

Struggling Marseille secured a vital three points on Sunday as they thrashed Mediterranean rivals Bastia 4-1, while Rennes climbed up to second in Ligue 1 after beating nine-man Nantes 2-0.

A turbulent first month of the season had left Marseille with just three points from four matches and one place above the relegation zone prior to kick-off at the Stade Velodrome.

But the international break appeared to arrive at just the right time for Michel's side as a refreshed OM took a 16th-minute lead through Benjamin Mendy before a second-period brace from Romain Alessandrini and subsequent strike from Michy Batshuayi lifted the gloom.

“What did I like (about the performance)? Everything,” a beaming Michel said afterwards.

“The end product from my players made me very proud. When I see them play like that I have to thank them because I think the team has the resources required to play at this high level.”

“Bastia weren't perhaps at the level we thought they would be tonight, but we played a fantastic match,” added the Spaniard.

Brandao netted a consolation effort against his former side as Bastia slid to a second straight defeat, having started the campaign by taking seven points from their first three matches.

The honeymoon period for Michel, whose side destroyed Troyes 6-0 on his debut, did not last long as the Spaniard saw his men slide to a 2-0 defeat at Guingamp last time out.

However, a two-week break from domestic action and a chance for the ex-Real Madrid winger to fully get to know his players seemingly proved the ideal tonic for a team that slumped to three defeats in four August outings.

A well-worked corner picked out Mendy who curled home a sumptuous strike from the edge of the box to put Marseille in front.

Alessandrini, Batshuayi and Remy Cabella had chances to double the hosts' advantage before half-time but Alessandrini made no mistake just seconds after the resumption as he broke in behind the Corsican defence and slammed the ball past Jesper Hansen.

Julian Palmieri picked out ex-Marseille striker Brandao as the Brazilian sent a thumping header beyond a helpless Steve Mandanda 12 minutes from time, the only blot on an otherwise encouraging Marseille performance.

Earlier, Rennes closed to within one point of leaders Paris Saint-Germain after beating Brittany rivals Nantes 2-0 to make it four wins on the trot for Philippe Montanier's men.

Paul-Georges Ntep marked his first start of the season by scoring the opening goal on 67 minutes with Nantes reduced to 10 men by that stage after Adryan was harshly dismissed for a challenge of Edson Mexer.

Things got worse for the home side with Kolbeinn Sigthorsson also sent off before Giovanni Sio wrapped up the points a minute from time.

Rennes, off to their best start since the 1950-51 season, could go top next Friday with a victory at home to Lille as PSG are not in action until Saturday, when the reigning champions make the short trip to Reims.

Monaco began life after Anthony Martial by picking up just their second win of the campaign with a 1-0 victory over bottom side Gazelec Ajaccio courtesy of Fabinho's first-half penalty.

On Friday Paris Saint-Germain goalkeeper Kevin Trapp endured a nightmare evening as the reigning French champions saw their perfect start to the season ended in a 2-2 draw with 10-man Bordeaux on Friday.

PSG had looked set to make it five straight Ligue 1 wins to start the campaign thanks to an Edinson Cavani first-half brace either side of Henri Saivet's equaliser.

However, German goalkeeper Trapp, who had already been at fault at the first goal, was caught in possession in the box by Wahbi Khazri with 11 minutes left, allowing the Bordeaux player to snatch a point for his side.

It was a sweet result for the visitors, who had been reduced to 10 men shortly before their second goal when skipper Saivet was sent off.