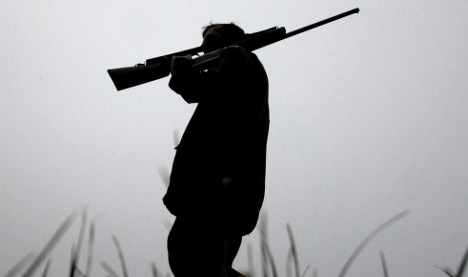 The hunting season begins and rather predictably so too have the accidents. Photo: AFP

France has seen some tragic and freakish hunting accidents in recent years and things don’t bode well for the coming season after a 72-year-old was badly injured on the opening weekend.

The hunter was hit in the leg by lead pellets fired by another hunter, which unconfirmed reports said was his own brother.

The accident occurred near Montregard in the east of the Haute-Loire département, when the brother was reportedly taking aim at a hare.

The victim was taken to hospital where his condition is not thought to be too serious.

The stray shot is by no means the worst hunting accident in France in recent years, with around 12 people killed and 200 injured during each season. In September 2013, an 82-year-old hunter shot two walkers after mistaking them for pheasants and in October 2013 a man killed his son by mistake after thinking he was a boar.

On that same weekend a six-year-old boy was killed in a freak accident when a dog knocked over a loaded gun that set off the trigger.

In December 2012 a boy was lift fighting for his life after being shot in the head while hunting with his uncle and in December 2013 a teenager accidentally killed his father on a hunting trip.

Perhaps the most bizarre incident in recent years was when a French motorist was killed after a bullet fired by a hunter ricocheted off a wild boar, before travelling almost 2 km across fields, through the driver's window and eventually striking the driver in the head. Each incident has been used as ammunition by anti-hunting groups who argue that stricter rules need to put in place around a leisure activity that attracts some 1.25 million participants in France.

The Association for the Protection of Wild Animals (ASPAS), which is campaigning for a ban on hunting on Sundays and for more safety measures to be introduced, held protests at the weekend.

The group claimed that five people had already been injured before the season had even opened – including a 16-year-old walking along a country road.

Speaking to The Local previously, Pierre Athanaze, the head of ASPAS, said the laws needed to be changed in France to prevent more deaths.

“Hunting needs to be stopped on Sundays, because this is the most dangerous day. There are more and more people heading out into the countryside on a Sunday, whether it's walking, mountain biking or collecting mushrooms. We want an end to it,” he said.

Athanaze also pointed to the fact that many people who go hunting in France these days are elderly and are “not subject to any medical checks” to ensure they have their wits about them and are capable of spotting the difference between a pheasant and two mushroom collectors.

ASPAS is also demanding a change in the law whereby the organizers of hunts can be held responsible in the case of serious accidents.

This year's hunting season closes at the end of February.