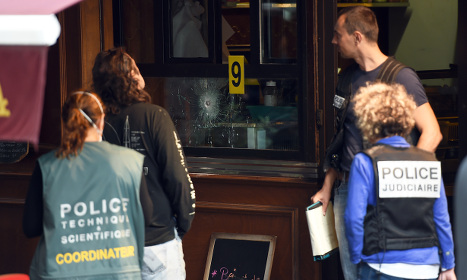 Two men opened fire with a 9 mm automatic weapon outside of a 24-hour restaurant in the city’s Opera district.

“It would seem that following a dispute, a vehicle facing the street opened fire with a Kalashnikov on people who were at the entrance to the bar,” Marseille’s deputy prosecutor André Ribes told news agency AFP.

“For now, we cannot call this a settling of scores,” he said.

A security guard was killed and three of the five injured are seriously wounded, according to Ribes.

Some of the victims were “collateral damage” while others worked as security for the restaurant, including the slain guard, he said. There were 15 to 20 people present during the shooting.

The city in southern France and its surroundings areas are the scene of turf wars between multiple rival gangs battling for control of the drugs trade in the city's poorest neighbourhoods.

“There is always too much violence in this city,” Interior Minister Bernard Cazeneuve told French television news show Le Grand Rendez-vous on Sunday.

He said 6,000 weapons a year were being seized from criminal groups, of which 1,200 were combat rifles and other weapons of war.

“The disarmament of all criminal groups should be stepped up, and I propose that in the next five to six weeks … there is a comprehensive plan to fight against arms trafficking and possession of weapons in our country,” he said.