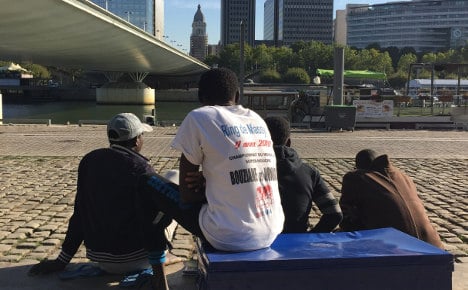 A group of refugees sit by the banks of the Seine but have they been forgotten about? Photo: Rory Mulholland
The few hundred refugees taken in by France this week to ease pressure on Germany were immediately given accommodation, food and medical care and a promise of relocation as well the necessary help to negotiate the asylum system.
The nation’s news channels gave their arrival wall-to-wall coverage, and several politicians patted themselves on the back, praising their country for pulling its weight in the refugee crisis.
But it hasn't gone unnoticed that thousands of refugees – or “migrants” as they were known before the shocking photo of Aylan Kurdi brought about a shift in terminology – who arrived in France long ago have been somewhat neglected.
Thousands of refugees who have been here for months or longer  – most from the same war-torn countries as the newly arrived “migrants” – are living in squalid makeshift camps or on the streets and claim they get little or no help from the authorities. (Tents housing refugees line the banks of the Seine at Austerlitz. Photo: Rory Mulholland)
Isaac, a 25-year-old former farmer from the Darfur region of Sudan, lives in a tent under a bridge on the banks of the river Seine in Paris, one of several camps dotted around the French capital.
He hadn’t heard of the warm welcome the new arrivals from Germany were given this week in Champagne-sur-Seine and Cergy near Paris, and said the only help he was getting was from an aid group who come to his camp, where around 350 people live, every second day to bring warm meals.
“Life is difficult here,” he told The Local, toothbrush in hand in the early autumn sun. “I didn’t think when I left Sudan that I would be living in a tent.”
Other refugees from the Darfur region have complained that the conflict in their region is given little attention compared to the strife in Syria.
“Every day there is fighting in Syria, but everyday there is fighting in Darfur. It's the same thing,” Adam, a 25-year-old Sudanese refugee told L'Express magazine.
To make their point Sudanese refugees have been holding regular demonstrations in front of the Town Hall in Paris's 18th arrondissement in recent days.
Posted on a nearby wall on the bridge next to Austerlitz train station was a photo of Paris mayor Anne Hidalgo with the words “Keep Your Promises” scrawled over it. (“Keep your promises” – a message to mayor Anne Hidalgo. Photo: Rory Mulholland)
The Paris city hall has promised to provide an extra 460 beds in temporary accommodation in the coming days, and says it has already provided 1,450 beds since early June.
But many migrants are still living rough in Paris.
And in the northern port town of Calais about 3,500 migrants are living in miserable conditions in a shanty town nicknamed the “New Jungle.” Most of them are hoping to sneak onto a train or truck to get into Britain. (Clothes hang out to dry at the “migrant” camp at Gare Austerlitz. Photo: Rory Mulholland)
Prime Minister Manuel Valls last month said officials would soon turn the “Jungle” there into a properly serviced “humanitarian camp” with tents to house 1,500 migrants. But that is far below the total number of people, many from Eritrea, Sudan, and Syria, currently living there.
“They need proper hard structures, not tents,” said Jean-Francois Corty of the Médecins du Monde charity which has been helping migrants in Calais.
Corty said he welcomed President François Hollande announcement this week that France is ready to do its duty and take in 24,000 refugees as part of EU plans to resolve the migrant crisis engulfing Europe.
“But for years we’ve been asking the government to do more to respond to the needs of those in Calais,” he said, adding that the calls for help by his group and other charities had mostly fallen on deaf ears.
Médecins du Monde set up a health clinic in the “Jungle” in July and joined with several other aid groups to send in an aid convoy of food, hygiene kits and jerrycans.
The charities said in a joint statement that their action was of the type “usually reserved for situations of war or catastrophe.”
Other aid groups in Paris have also grown frustrated with the lack of support given to those arrived long before the photo of the drowned Syrian boy Aylan Kurdi prompted a shift in public and opinion and policy.
“In Cergy, they have a roof over their heads, they have meals, but here [at Austerlitz] what are they doing for them? a woman named Sarah, who was delivering clothes to the camp, told L'Express. (Migrants call for roofs over their heads. Photo: Rory Mulholland)
Yahya, another Sudanese asylum seeker living under the bridge by Austerlitz station, told The Local that he too had also received nothing from the French authorities.
But he is nevertheless optimistic that help will one day come and that he, like the refugees who arrived this week from Germany, will one day get proper lodgings, hopefully before winter sets in.
In the meantime he is working on his French, and frequently studies in the national library that lies a short walk from the bridge that is currently his home.
In the gritty 19th arrondissement in the north of Paris, other migrants The Local spoke to told the same tale of official neglect.
Biniam, a 36-year-old from Eritrea, was snoozing on a sofa under an overhead metro line. (Biniam: 'No one has offered us a place to sleep. Photo: Rory Mulholland)
He explained in his limited English that he had been sleeping here for the past two nights, after spending several months in Calais making failed attempts to get to England.
A few hundreds metres away, several of his compatriots were sitting on a street corner on Rue Pajol, the scene of recent violence when riot police forcibly removed dozens of migrants.
“I slept on the street last night,” said Ismail, who said he was 26 and a former soldier. “Nobody has offered us a place to sleep in Paris,” he said, adding that he was intent on getting to London because he could speak the language there and because he was sure it would be easy to get a job.
Until he gets there he and others will hope they are given the support offered to refugees rather than migrants.
by Rory Mulholland