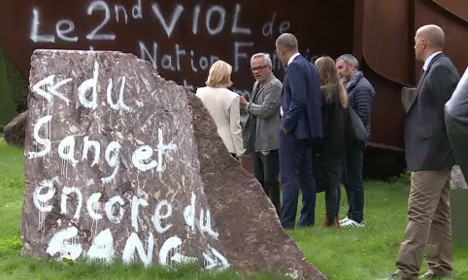 A controversial sculpture by British artist Anish Kapoor on display in the gardens of France's Palace of Versailles has
been vandalised for a third time, with graffiti saying “respect art” scrawled on it, the royal chateau said on Thursday.

It also emerged that thee artist is being sued by a local politician in Versailles for refusing to clean previous anti-Semitic graffiti from the sculpture, which the official claims incites racial hatred.

It is set up in the garden of the chateau, which attracts five million tourists a year.

The phrase “Respect Art as U trust God” was scrawled over the artwork in large letters with pink paint, the management of the palace said, adding that security at the site would be stepped up with nighttime police patrols and new surveillance cameras.

But it did not attempt to explain the meaning of the graffiti, which could be interpreted as criticism or support for the artist

When it was first unveiled in June the piece was sprayed with yellow paint.

On Sunday, it was vandalised for a second time when it was covered in anti-Semitic graffiti in white paint.

Phrases such as “Queen sacrificed, twice insulted” and “the second rape of the nation by deviant Jewish activism” covered the work.

Following that incident, the 61-year-old British-Indian artist said he wanted the graffiti to remain to bear witness to hatred.

France's culture ministry agreed, and said panels next to the work would explain what happened.

However one local councillor in Versailles has taken offence and launched a law suit against Kapoor.

The artist is not cowed and vowed to take on Bouglé.

“I think it’s a wonderful reversal; I’ll see him in court,” said Kapoor. “It shows how insane the whole thing is.”

Kapoor has previously described the piece as “the vagina of a queen who is taking power” but later appeared to step back from this description.

It is one of several by the artist on exhibition in the gardens and inside one room of the palace until November.

Kapoor's exhibition is one of the most controversial at Versailles since the authorities in 2008 opened the palace and its grounds to contemporary artists.

His work is not the first to raise anger in France.

In October 2014, vandals in Paris's Place Vendome deflated a massive sculpture by American artist Paul McCarthy that was shaped like a sex toy.

McCarthy then decided to take down the work, which had both outraged and amused Parisians.