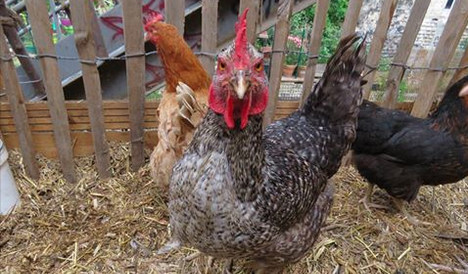 The stolen chickens of the La Recyclerie. Photo: AFP
La Recyclerie, housed in an old railway station in the gritty north of the capital, issued an appeal on Facebook this week after Ghislaine, Eva, Salma and three other birds disappeared overnight from the mini-farm that is also home to a collection of goats.
It said it was a “sombre day,” as the chickens were the stars of the farm that is stretched out along the side of the disused rail line. They were tasked with reducing the bar-restaurant’s waste by devouring food left over by customers.
La Recyclerie, which plans to install security cameras on the pen where its remaining 10 chickens are kept, called on customers to keep an eye out for the birds and to tell police if they had spotted any foul play.
The appeal quickly drew hundreds of comments and was picked up by national newspapers keen to spread the word about the pilfered birds.

Some comments were humourous – such as “Bring Back our Chickens” –  a nod to the more serious hashtag #Bringbackourgirls that went viral after thousands of Nigerian girls were abducted by Islamist extremists.
Another simply wrote: “It was Kentucky Fried Chicken who did it!”.
But most were deadly serious, with one woman writing that the theft was “truly scandalous.”
“You try to reinvigorate an area, to make it more green, more ecological, more pleasant, and there are still unscrupulous people who think they can ruin everything.”
Another wrote: “Stealing chickens is frankly disgusting. Where have our little mascots gone? Bring them back quickly.”
La Recyclerie has become the place to be seen for trendy Parisians since it opened in summer 2014 right next to Porte de Clignancourt metro station. Aside from the restaurant, café, vegetable garden, and farm, it also offers daily DIY workshops.
The venue was described in one reviews as having an atmosphere that was “part hippy, part hipster”, while another labels it as an “urban farm for a cool and hipster local crowd”.
Its website says that it is “bathed in a universe that emphasises low-tech, the tangible, the manual, the transmission and the reappropriation of useful traditions.”
by Rory Mulholland