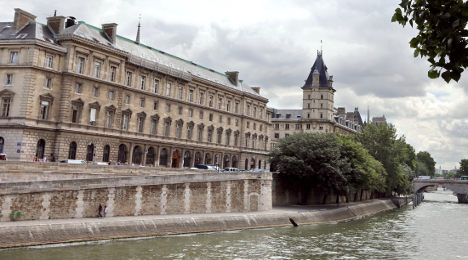 36, Quai des Orfevres, the home of the Paris police HQ, where a Canadian was raped. Photo: AFP
All 120 police officers and civilian staff who were present in the building on the night the rape took place in April 2014 are being tested over three days, Le Parisien reported.
Investigators are trying to find a match for a so far unidentified DNA sample taken from sperm found during the victim’s medical examination.
Four DNA traces were found on the victim or on her clothes. Three have been identified – those of the two officers charged, and that of a third officer who is a witness in the case.
But investigators have been unable to identify the fourth, and thus decided to test all men present on the night the Canadian accompanied the officers back to the police station after a night of drinking in a nearby Irish pub.
The leader of Synergie police union, Patrice Ribero, denounced the mass DNA testing as “excessive” and said it would stigmatise all officers at the police headquarters.
The then 34-year-old Canadian met the officers during a night of heavy drinking at the Irish pub frequented by police from the headquarters, which is widely known in France by its address: 36, Quai des Orfevres, judicial sources said.
They said she agreed to follow them to their workplace, which lies just across the Seine from the pub in the Saint-Michel tourist district.
She registered a criminal complaint soon after the alleged assault.
One policeman has admitted to having consensual sex with her but denied rape. A judicial investigation was launched and the accused are also facing a probe into tampering with the scene of a crime.
A source close to the investigation said the woman's spectacles and stockings disappeared after she filed the complaint.